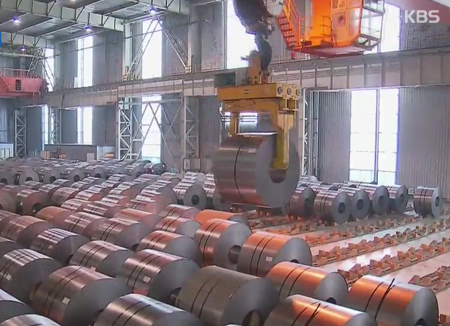 A delegation of South Korean trade negotiators returned home from the U.S. on Sunday, March 25, after discussing with U.S. officials the revision of the Korea-U.S. free trade agreement and the exemption of South Korea from heavy U.S. tariffs on steel imports. Upon arrival in South Korea, Trade Minister Kim Hyun-jong said that a deal on the Korea-U.S. FTA and steel tariff issues has been reached in principle. These issues emerged as hot topics amid Washington’s intensifying trade protectionism. Here is Dr. Kim Hyung-joo at the LG Economic Research Institute to analyze the hectic trade negotiations between South Korea and the U.S. First, Dr. Kim explains why South Korea got a temporary exemption from the U.S. steel tariffs last week, which was certainly good news for the local steel industry.

The most important reason is a free trade agreement or FTA between South Korea and the U.S. Section 232 of the Trade Expansion Act has to do with the national security of the U.S. For the U.S., signing an FTA with a particular country means matching their economic interests and also security concerns of the two sides. The U.S. decided on the temporary tariff exemption for countries involved in trade talks, including the North American Free Trade Agreement or NAFTA and the Korea-U.S. FTA, since Washington concluded that those countries would pose no security threat to the U.S. In addition to the FTA issue, another important factor is North Korea. In the past, North Korea-related issues were mostly discussed between the U.S. and China or among the U.S., China and North Korea, and South Korea’s diplomatic role was rather ambiguous. But in the latest developments, South Korea actively holds dialogue with North Korea and even mediates between North Korea and the U.S. for their summit. For the U.S., therefore, South Korea’s role has become more important than ever before. I think Washington also took this factor into consideration before making the decision about the temporary suspension of the tariffs.

On March 22, U.S. President Donald Trump said in an official statement that the U.S. will temporarily exempt six countries, including South Korea and the European Union, from heavy tariffs on steel and aluminum imports until the end of next month. As for the reasons for the inclusion of South Korea on the list of the temporary tariff exemptions, the White House cited the joint commitment between South Korea and the U.S. to eliminate North Korea’s nuclear threats and their long standing military alliance. But the White House also mentioned the possibility of imposing quotas on steel imports from the nations that won the temporary exemptions. Previously, the Department of Commerce proposed setting a quota of 63 percent of each country’s 2017 steel exports to the U.S. Apparently, the U.S. brought up the quota issue, having the FTA negotiations in mind.

The U.S. is using the steel tariff issue as important leverage to draw a better trade deal from the countries involved in NAFTA and the Korea-U.S. FTA. For that purpose, the U.S. approved a temporary exemption until the end of April, not a permanent one, and also mentioned quotas on imported steel. In doing so, the U.S. could raise the steel tariff issues anytime it thinks the trade negotiations with Mexico and Canada, and with South Korea, are not proceeding in the direction it wants to go.

In fact, the U.S. has said that it would link the negotiations to amend the Korea-U.S. FTA with the steel tariff issue. To resolve the problem, South Korean Trade Minister Kim Hyun-jong stayed in the U.S. for the past month to participate in the marathon negotiations. As a result, South Korea managed to win a temporary exemption from the steel tariffs in the first place, and effectively reached a settlement on revising the FTA and steel tariff issues. Upon returning home, Kim said that uncertainties related to steel tariffs have been eliminated to enable Korean steelmakers to sell their products to the U.S. on a stable basis. If the local steel industry was hit by a so-called “tariff bomb,” it would suffer from estimated damage of hundreds of millions of dollars. Fortunately, it will avoid the damage. But it doesn’t mean the crisis has ended. On March 22, Trump signed an executive order calling for imposing tariffs on around 60 billion dollars worth of Chinese imports, signaling a trade war between China and the U.S.

This is the most disturbing part. If things ended up in a trade row solely between the U.S. and China, or between South Korea and the U.S., the conflict could be resolved quietly. But the U.S. is asking Japan and the EU to join its trade sanctions against China. The situation reminds many people of the 1985 Plaza Accord, which was an agreement to devalue the dollar against the Japanese yen and German Deutsche Mark by intervening in currency markets. Some speculate that a second Plaza Accord will emerge to deal a blow to China. It is highly likely that the U.S. will ask South Korea to join the drive. China will certainly have hard feelings toward those who join the move and this may lead to China’s trade retaliation.

Washington’s measure drew a strong backlash from China, which warned of trade retaliation against the U.S. On March 23, the Commerce Ministry in China said in a statement that it plans to impose tariffs on 3 billion dollars worth of American imports, including steel and pork. A looming trade war between the two major economies is expected to deal a blow to South Korea’s exports.

If the U.S. and China raise their import barriers, although they may not go as far as to wage a trade war, bilateral trade as well as production will decrease. South Korea sells a significant amount of parts, intermediary goods and facilities to the U.S. and China. The reduction of exports and production in the two countries will result in a decrease in South Korean exports to those nations. That’s what the government is most worried about for now. Also, the economic slowdown in China and the U.S. and shrinking demand will take a toll on South Korea’s exports of finished goods as well. If the U.S. slaps tariffs on some finished products from China, their South Korean rivals may take advantage of it, although this is a small issue. So, there may be both negative and positive effects. But in the end, Korea will have more to lose than gain.

China and the U.S. account for 25 percent and 12 percent of Korea’s total exports, respectively. If Korea faces difficulty in exporting goods to one of the two countries, the Korean economy will take a direct hit. Trade restrictions against China, which make up 29 percent of Korea’s outbound shipments of intermediary goods, will deal a blow to its major export items such as semiconductors, petrochemicals and display panels. Also, the U.S. could urge South Korea to join its trade pressure against China, as it has already requested the EU to do so. South Korea needs to map out a more effective strategy to cope with the trade dispute between the U.S. and China.

The most important factor in trade strategies is the size of the market. These days, it is often said that a nation with a large market is a truly strong nation. Without a doubt, countries with huge markets, like the U.S. and China, have a strong voice on trade issues. So, if South Korea responds to the U.S. or China one-on-one, the chances are against Korea. When talking about trade issues with world powers, it is desirable for Korea to resolve the disputes on the international stage through multilateral discussions involving countries that are similar to South Korea in size or share a similar world view, like the EU and Japan. When dealing with problems with the U.S. and China, South Korea has traditionally chosen one-on-one meetings such as summit talks or ministerial meetings. But from now, I think Korea should focus more on discussions through a multilateral channel.

Through active efforts, the Seoul government managed to remove the uncertainties of the Korea-U.S. FTA promptly and effectively settled the steel tariff dispute. To respond to the rapidly-changing trade environment, it should make the most of multilateral negotiations and carry out a well-thought-out strategy of linking South Korea’s unique diplomatic and security situation with trade issues.