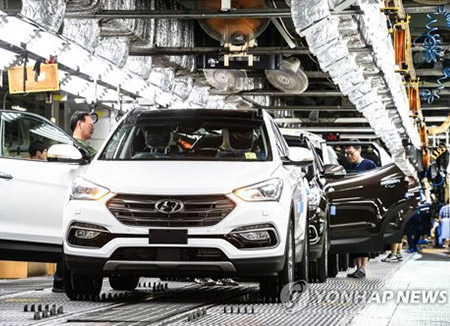 The Korean automobile industry is facing huge challenges both inside and outside the nation. South Korean-made vehicles once expanded their presence in the world market aggressively. But now, among the top 10 nations producing cars, Korea is the only country that has seen a decrease in auto production for two consecutive years. To make matters worse, there is growing speculation that GM may withdraw from South Korea, raising concerns over a looming crisis in the local auto industry. Today, here is Kim Pil-soo, professor of the Department of Automotive Engineering at Daelim University College, to discuss why the Korean auto industry is in crisis and how it can find a breakthrough. First, Professor Kim explains the current situation of the industry.

The indexes for the automobile industry show that the situation is pretty serious. Last year, operating profit margins of Hyundai Motor and Kia Motors remained in the 4-percent range and 1-percent range, respectively, meaning that they narrowly escaped running a deficit. Those of global automakers stand at 7 to 9 percent on average, with some brands posting 10 percent. But for Korean automakers, there isn’t much profit even after selling their products. This is a big problem. The Korean auto industry will soon fall to seventh place in the world in terms of output. Korean automakers’ market share in the U.S. is decreasing, while they have failed to explore new markets properly. In a word, they are not doing very well both in quantity and quality, and the chances of improving the indexes are slim.

Last year, the Korean auto industry saw a decline in domestic and overseas sales as well as in production. According to the Ministry of Trade, Industry and Energy, Korea’s auto output fell 2.7 percent to 4 million and 115-thousand units in 2017 from a year ago, due to sluggish sales both at home and abroad and a production shortfall caused by some labor strikes at domestic plants. Exports declined 3.5 percent to 2 million and 529-thousand units. Last year, the operating profit of South Korea’s largest automaker Hyundai Motor dropped below 5 trillion won for the first time since 2010. It was once the world’s fifth-largest automaker in terms of output, but slid to sixth place last year. This year, it will be difficult even to maintain that position. Korea has seen production and sales of cars falling for the first time since the nation’s automobile industry started half a century ago. Why is it in such a tight situation?

The industry has failed to make efforts to find a fundamental solution to the problems. First, it has been embroiled in conflict between labor and management. In many cases, both sides refused to compromise and went to extremes. They should know that it will only lead to co-destruction. Serious labor-management conflict means that workers get paid enough, while their output is only half of that of workers in advanced countries. In brief, the industry is stuck in the pattern of low productivity and high expenditure—a situation that should be improved by all means. Also, the government must play its role as a control tower. But different divisions in the government shift responsibility onto each other. In another problem, investment in research and development is rather inadequate and Korea lags behind advanced nations in technological development in the auto industry. I think these problems must be resolved.

As professor Kim explained, unstable labor-management relations and the structure of low efficiency and high labor costs are the most serious problems in the local auto industry. The ratio of labor costs out of Korea’s five carmakers’ overall sales reached 12.2 percent in 2016, surpassing 7.8 percent at Japan’s Toyota Motor and 9.5 percent at German automaker Volkswagen. It takes 26.4 hours to make a car in Korea, longer than 24.1 hours at Toyota and 23.4 hours at GM. Also on a negative note, Korean automakers are losing their competitiveness. The Korean auto industry was able to grow fast after the Asian financial crisis in the late 1990s, thanks to the popularity of sedan models. But it failed to diversify vehicle models. Korea has been unsuccessful at presenting hit models in sports utility vehicles and pickup trucks, which comprised the global trend in the 2000s. In another problem, Korean carmakers’ expenditures for research and development are in the lowest level among their global rivals. Worse yet, GM Korea has decided to shut down its Gunsan plant, adding problems to the already difficult situation.

The government should not rush to inject taxpayers’ money into GM Korea’s financial situation. Both labor and management should first make efforts to save themselves and reach a compromise so the government can consider fairness and justify its provision of the public fund to the company. Unfortunately, labor and management remain apart, asking the other side to make a concession. It seems GM in the U.S. is putting great pressure on Korea. There are suspicions that GM may use the fund for its short-term survival and pull out of the country in the end. GM Korea and the government should try hard to find an appropriate solution. If not, this will be a big problem.

While GM Korea has a hard time dealing with collective agreement negotiations with its union, GM headquarters said that its Korean unit will have to declare bankruptcy if it fails to hand in its restructuring outline by April 20. According to the Hyundai Research Institute, GM Korea’s complete withdrawal from South Korea is estimated to reduce the nation’s gross domestic product or GDP by 8.4 trillion won or 7.6 billion US dollars and cut 94-thousand jobs. The withdrawal of auto production facilities from Korea will have a ripple effect on the overall local economy, since they are related to various industries, including materials, parts and services. That’s why the Korean carmakers were extremely nervous when South Korea and the U.S. started negotiations to amend their free trade agreement.

On the whole, South Korea made concessions in the automobile sector at the recent FTA negotiations with the U.S. On a positive note, though, Seoul was able to fend off Washington’s request that more than 50 percent of auto parts should be procured in the U.S. But tariffs imposed on Korean pickup trucks exported to the U.S. will be extended by 20 years. Otherwise, they would be able to enter the American market more easily in two to three years. Many evaluate that South Korea managed to defend its economic interests at the recent negotiations. But it’s uncertain how things will evolve in the future, considering the unpredictable ways of Trump. So it is more important how to prepare against Washington’s future move. For now, Seoul is believed to minimize the potential damage.

On March 28, South Korea and the U.S. jointly announced that they reached an agreement in principle on the revision of their FTA. At the recent negotiations, the two sides agreed that a tariff on imports of Korean pickup trucks will be extended until 2041 and that South Korea will lower safety and environmental regulations on American vehicles. Korean negotiators defended against requests for a mandatory quota on U.S. auto parts—a sensitive issue for the Korean auto industry. Also, tariffs on Korean cars will not revive. It seems South Korea has avoided the worst-case scenario. But U.S. President Donald Trump said on March 29 that he might “hold up” the trade deal with South Korea to use it as leverage in negotiations with North Korea. Apparently, the remarks have some political calculations. But for South Korea, it is still too early to relax. To overcome the crisis eventually, the local automobile industry should secure future technologies.

Of course, internal combustion locomotives will play a role in the next two or three decades. But the hot topic is, as expected, electric cars and self-driving vehicles. The problem is that South Korea is three to five years behind in relevant technologies. The nation even imports LiDAR sensors used in self-driving cars. They are for detecting surrounding cars and objects. Cars will move beyond the realm of the means of transportation and evolve into a mobile household electrical appliance as movable living space, with some describing them as mobile phones on wheels. So, Korean carmakers should make efforts to make progress in this fusion industry. Otherwise, they will drop into the ranks of second-rate automakers. In this sense, the following two to three years will be very critical.

Alarming bells are ringing in various parts in the Korean auto industry. Now is time to make active efforts toward an industrial paradigm shift, rather than focusing only on solving urgent problems. South Korea couldn’t even make auto parts in the past, but it has risen to one of the world’s major carmakers. The nation should hopefully pull up its socks and turn the current crisis into opportunity.