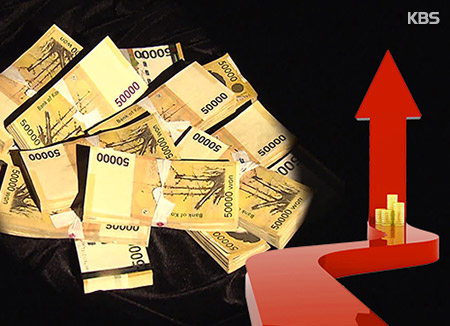 Since the beginning of this month, the won-dollar exchange rate has been falling sharply. Last week, the Korean currency was traded below the psychologically important 1,060 won mark against the U.S. dollar, stoking speculation that the won-dollar rate may fall to a three-digit level. Here is Kim Young-ik, professor of economics at Sogang University, to discuss why the Korean won has been fluctuating against the greenback and how the exchange rate may change in the future.

On April 3, the Korean won closed at 1,054 won, soaring to its highest level against the dollar since October 2014, up 3.4 percent from 1,092 won posted on February 6. That means a rise in the value of the local currency. The U.S. Treasury Department set the three criteria for the designation of a certain U.S. trading partner as a currency manipulator. They are a current account surplus exceeding three percent of gross domestic product or GDP, more than 20 billion US dollars in an annual trade surplus with the U.S., and an intervention in the currency market with a net purchase of foreign currency surpassing two percent of GDP. In the case of South Korea, its current account surplus stands at over five percent of GDP. So, there are concerns that the U.S. may label South Korea as a currency manipulator. In fact, the Korean stock and foreign exchange markets have been somewhat underestimated due to North Korea-related risks. But with an inter-Korean summit and a North Korea-U.S. summit scheduled for April and May, respectively, the geopolitical risks have been eased to lead to the Korean won’s surging value against the dollar.

One of the factors behind the won’s rapid gain is reduced risks related to North Korea. Tension has eased on the Korean Peninsula in recent months amid a reconciliatory mood between South and North Korea and rising expectations for a summit between North Korea and the U.S., and more investors are opting for the Korean won. Another factor is growing speculation that it won’t be easy for the local financial authorities to intervene in the foreign exchange market. The U.S. releases a report on foreign exchange policies in April and October every year. South Korea met two of the three criteria for designation as a currency manipulator, and it is one of the countries that have been placed on the monitoring list. If the Korean government interferes in the foreign exchange market before the U.S. releases this year’s currency report, Korea will be designated as a currency manipulator to face strong economic pressure. Meanwhile, controversy over the inclusion of a “side deal” in the revised free trade agreement, or FTA, between South Korea and the U.S. added fuel to the volatility in the won-dollar exchange rate.

On March 28, the U.S. Trade Representative said that a memorandum of understanding between South Korea and the U.S. is being finalized on robust provisions to prohibit competitive devaluation and exchange rate manipulation in order to promote a level playing field for trade investment. This report accelerated the falling won-dollar rate. But the Ministry of Strategy and Finance in Seoul denies rumors of a side agreement on currency exchange. Finance Minister Kim Dong-yeon said that Korea will protect its sovereignty regarding currency policies and that the government will intervene in the foreign exchange market to counteract extreme one-side movements in the market. After his remarks, the won-dollar rate has become stable a little.

The South Korean government flatly denied any link between the FTA revision and a currency agreement, with Deputy Prime Minister and Finance Minister Kim Dong-yeon stressing that the intervention in the market will be determined by Korea’s own lead. Considering mounting fears of a trade war between the U.S. and China, however, there are concerns over the possible emergence of a second Plaza Accord.

The Plaza Accord was signed in September 1985. At the time, the U.S. was struggling with ever-growing current account deficits. Five countries, such as the U.S., France, Germany, Japan and the U.K., signed the Plaza Accord to work toward appreciating the Japanese yen and the Deutsche Mark. The agreement was the result of the U.S. trying to reduce its current account deficits. After that, the yen was pushed upward, more sharply than the Mark, to cause great difficulty for Japanese exporters. Now, many are talking about a second Plaza Accord. Apparently, the U.S. has its eye on China, rather than South Korea, as the U.S. trade deficit with China amounted to 375 billion dollars last year. If the U.S. considers a second Plaza Accord, the target would be the Chinese yuan, not the Korean won.

Thirty three years ago, the U.S. revalued the Japanese yen and the Deutsche Mark by 66 percent and 57 percent, respectively, over two years, to solve its own economic issues. The yen’s steep gains, in particular, led to the weakening competitiveness of local exporters and the collapse of the bubble in the domestic property market. As a result, Japan had to endure a long period of stagnation known as “two lost decades.” Today, whenever the U.S. sees current account deficits, it points the finger at China, Japan, South Korea and Germany, which have a large trade surplus with the U.S. If the U.S. forces the Korean won to appreciate, just as it did to the Japanese yen back in 1985, the measure will deal a blow to the Korean economy, which relies heavily on exports. The target might be China, not South Korea, as Professor Kim predicts. Even so, problems will also arise.

Many mention the term, “Thucydides Trap,” which refers to the situation where a rising power threatens an established power to trigger a war. Today, the old or established power is the U.S., and the new power is China, which is growing too fast. Amid a trade row between the two major economies, China might sell U.S. government bonds. If that happens, the dollars will lose its value and the yuan will appreciate further. If the yuan remains strong, the Korean won will inevitably appreciate, as South Korea is highly dependent on China for its outbound shipments. Therefore, the won-dollar rate will fall over the long term, rather than rising. The Korean economy should brace for the weak dollar trend, which is expected to accelerate down the road.

On April 3, the U.S. Trade Representative announced the decision to impose a 25 percent tariff on 1,300 Chinese products. Only about an hour later, the Commerce Ministry in China hinted at retaliatory measures. Fortunately, the two countries could stave off a looming trade war, as U.S. President Donald Trump said that the U.S. is not in a trade war with China. But a full-scale trade showdown between the two nations, if realized, will certainly affect financial markets, including South Korea’s currency market. Some are already expecting the era of the three-digit won-dollar rate, as there are various factors to facilitate the stronger won against the dollar, including no market intervention by the financial authorities, a thawing mood in inter-Korean relations and the trade dispute between the U.S. and China. That’s why the government needs to come up with more fundamental countermeasures.

It has become quite difficult for the government to directly intervene in the foreign exchange market, as it says that it will disclose records of its intervention in the market. To cope with the situation, it is most important to diversify export destinations. Some Korean products, including semiconductors, stay highly competitive and are faring pretty well in the global market, regardless of the exchange rate. As time goes by, South Korea will inevitably decrease its dependence on the U.S. for its exports, with the axis of consumption shifting from the U.S. to Asia. On a positive development, South Korea has increased its exports to the Association of Southeast Asian Nations or ASEAN, which made up 17 percent of Korea’s total exports last year. If South Korea actively uses the ASEAN market, Korean exporters will not be hit hard by the fluctuating exchange rate. The biggest problem of the Korean economy is that it is too dependent on exports, with exports representing more than 50 percent of the nation’s GDP. So, it’s necessary to stimulate domestic consumption. Of course, the situation cannot be improved in a short period of time because of the nation’s massive household debt. The government should devise a policy to resolve the debt problem and boost domestic demand.

The export-driven Korean economy is sensitive about fluctuations in exchange rates, since the local currency’s rapid gain will make Korean exporters lose their price competitiveness in overseas markets. That’s why macroeconomic factors should be taken into consideration when dealing with the currency market. From a longer perspective, Korea should hopefully diversify its trade market and expand domestic demand.