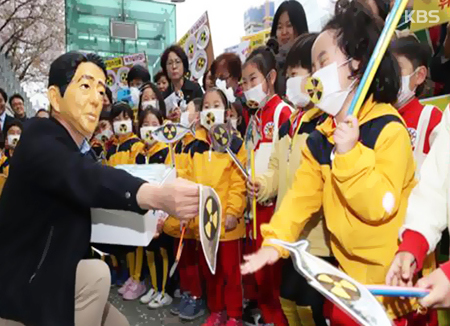 The World Trade Organization or WTO has ruled in favor of Japan in a dispute about South Korea’s ban on imports of Japanese seafood. The WTO reaffirmed the ruling in a report in February, four months after it made the decision last October. In response, the Korean government filed an appeal against the ruling by the Geneva-based organization on April 9. Here is economic commentator Chung Chul-jin to examine the dispute between Korea and Japan over the former’s import restrictions on the latter’s marine products.

The dispute dates back to 2011, when Japan was unfortunately hit by a massive earthquake and suffered a nuclear power plant meltdown in Fukushima. Amid fears of radioactive leaks from quake-hit Japan, South Korea prohibited imports of agro-fishery products from Fukushima. In 2013, the ban was expanded to include 28 fishery products from eight Japanese prefectures near Fukushima. Japan took the case to the WTO in protest. The WTO ruled in favor of Japan in its first hearing, saying that South Korea’s measures lacked transparency. In turn, Korea’s trade ministry has filed an appeal against the ruling.

Following the devastating earthquake in eastern Japan and the ensuing nuclear accident in Fukushima in March 2011, 46 countries, including South Korea, introduced import restrictions on Japanese food products. Those measures are still in place in 24 countries. Japan filed a complaint with the WTO in 2015 to challenge South Korea’s import bans. So far, Korea is the only country that Japan has taken to the WTO. Tokyo argued that Korea’s excessive measures were unfair, while other countries, including the U.S. and Australia, lifted or eased their Fukushima-related measures. After examining Japan’s complaint, a WTO dispute panel released a report in February and ruled that South Korea’s measures failed to comply with a WTO agreement. The panel assessed that the measures were discriminatory against Japanese products and that Korea’s request for additional testing was trade restrictive. However, 24 nations, including the U.S., Russia and Argentina, also requested Japan to submit certificates of inspection on radioactive substances for its products. Nine countries have specifically designated prefectures near Fukushima so they can ban imports of seafood from the areas. In light of this, the Korean government has appealed the WTO ruling, citing continued worries about Japanese nuclear reactors and the food safety of South Korean people.

The Korean public is highly concerned about radioactive contamination in seafood from Japan, and the imports of Japanese marine products may prompt South Korean citizens to feel uneasy about what they eat and to distrust the food industry. That’s why the government is being sensitive about this matter. The Japanese fish on the import ban list include mackerel, mackerel pike, abalone, Pollack, anchovy, salmon, squid and cod. These are all very popular in South Korea. If the import restrictions are lifted, fishery products imported from the Fukushima area might be put on sale along with local ones in South Korea and public fears may spread. For example, people may suspect that the squid they eat came from Japan, although it is actually from Korea.

The U.S.-based Woods Hole Oceanographic Institution examined groundwater beneath eight beaches within 100 kilometers of the Fukushima nuclear power plant. It found that the levels of cesium 137 in the groundwater were up to 10 times higher than the levels found in seawater within the port of the nuclear power plant itself. Japanese media, too, reported that radiation-contaminated water at the Fukushima nuclear plant continues to be released to the ocean and high concentrations of radioactive cesium have been accumulating at the bottom of dams near the nuclear plant. If Korea imports seafood from the Fukushima area, with problems still arising, Korean citizens will distrust marine products overall to affect the local food industry negatively. Having these concerns in mind, the Korean government has prepared to appeal the WTO ruling.

The process of the appeal will proceed faster than the first hearing. WTO appeals are supposed to conclude within 90 days, and a report on the appeal will be released within 30 days. Both sides will be informed of the result within 30 days after the report is adopted. If the WTO rules against South Korea again, Korea will have to decide on whether to accept the ruling. If so, it should lift the ban immediately. But if Korea finds it difficult to take action quickly, it could delay imports of Fukushima seafood during the deliberation period of 15 months. Now that the Korean government has appealed the ruling, the result will be announced around July. For Korea, the prospects are not very bright, considering previous WTO appeals. The Korean government has never won in an appellate hearing of the WTO after losing in the original hearing.

While preparing for the appeal, the government said that it has secured more solid evidence to counter the WTO’s assessment that Korea’s import restrictions were inconsistent with WTO rules. The result will be available as early as July, but the process may take longer due to the absence of some members of the WTO’s appellate body. If Korea loses the case in the final ruling, it will be given a deliberation period of up to 15 months before lifting its ban on Japanese seafood imports. So, Korea can keep its import ban in place until early 2021 at the earliest. But the government will still be in a tricky position.

If Korea loses the case, it may comply with the WTO’s decision or ignore it to continue to impose a ban on fishery products from Japan. According to international law, WTO rulings carry no legal binding force but a country is allowed to retaliate against its opponent nation that defies a WTO ruling. Therefore, if Korea challenges the WTO decision and refuses to lift its import ban, Japan will slap retaliatory tariffs on imported goods from South Korea, as if waiting for this to happen. Taking its own interests into consideration, Japan will arbitrarily decide on South Korean products that would be subject to the tariffs. That is, Tokyo will drop a tariff bomb on key imported items from Korea, and the two countries will inevitably engage in a bitter trade dispute.

If the WTO rules against Korea in its final decision, Korea will either lift its import ban or maintain it. If it chooses to continue with its import restrictions, it should brace for Japan’s retaliatory tariffs. So, if Korea lifts the ban, it should deal with the food safety problem inside the nation. If it keeps the ban, there will be concerns over Japan’s retaliatory measures. With the U.S. already deciding to implement safeguard measures on South Korean washing machines and intensifying trade pressure on South Korea steel products and automobiles, a trade dispute with Japan will add to Korea’s difficulties, as it depends heavily on exports. Analysts are saying that the government will have to conduct a more precise inspection of Japanese seafood first.

For now, it’s uncertain whether or not Japanese fishery products will enter Korea. But the government needs to inspect the Japanese products more thoroughly and disclose the exact situation to citizens to win public trust and ensure objectivity. I think citizens want to communicate with the government based on objective research results. Restoring public confidence and dispelling vague fears is what the government should do first domestically.

The government should put top priority on protecting the health of people, and this cannot be stressed enough. It’s time to relieve public worries on an objective and scientific basis and cope with the WTO ruling with a carefully-planned strategy.