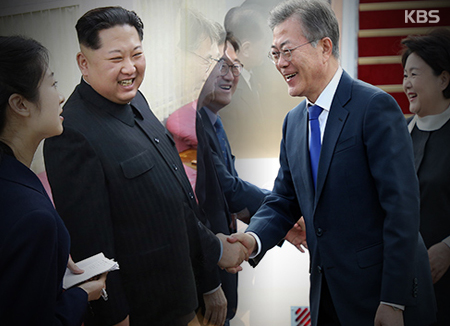 With a summit between South and North Korea drawing nearer, not only the diplomatic community but the local business sector is also looking forward to some positive result from the historic summit. There is a possibility that the leaders of the two Koreas may declare an official end to the Korean War during their upcoming summit, and expectations are running high for eased geopolitical risks, which are one of the main factors behind the underestimation of the South Korean economy. Here is Cho Bong-hyun, deputy head of the Industrial Bank of Korea Institute, to discuss potential economic effects of the 2018 inter-Korean summit.

The inter-Korean summit will take place on April 27, and the unprecedented North Korea-U.S. summit will be held in late May or early June. North Korea’s denuclearization will top the agenda for the two summit meetings. Other discussion topics of the South-North summit will include the establishment of a peace regime on the Korean Peninsula and the stable development of inter-Korean relations. Denuclearization is the top-priority issue, as I said, but it doesn’t mean the two Koreas will not touch on bilateral economic cooperation. What I mean is that economic issues will be discussed naturally once the nuclear problem is resolved. The inter-Korean summit is unlikely to end up being a one-time event but will hopefully continue to take place whenever necessary. If the two sides find a major breakthrough for the nuclear issue at this week’s summit, they may discuss economic issues at additional talks.

Unlike the two previous inter-Korean summits, this week’s summit talks will focus mostly on the denuclearization issue, and inter-Korean economic cooperation might be discussed in the next stage. Currently, North Korea is under international sanctions imposed by the U.N. Security Council. In this reality, South and North Korea find it difficult to carry out their economic cooperation properly. But if an inter-Korean summit is held on a regular basis, starting with the one this week, Seoul and Pyongyang will be able to discuss economic issues in earnest. The presidential office in Seoul has recently said that involved nations are considering means of replacing the armistice agreement with a peace treaty through the declaration of an end to the Korean War at the inter-Korean summit and the North Korea-U.S. summit. Attention turns to whether the positive development will help ease the chronic “Korea discount” in the local stock market.

The Korean War ended in an armistice, leaving the two Koreas technically at war. That means South and North Korea may clash at any time and that’s why tension would escalate on the Korean Peninsula. But the upcoming summit will likely discuss a complete end to the Korean War armistice and the signing of a peace treaty. The replacement of the decades-long armistice with a peace treaty will have a tremendous effect on the South Korean economy. In fact, North Korea’s repeated provocations would rattle the South Korean stock and financial markets. With South and North Korea in a state of war, local stocks have been undervalued due to geopolitical risks. This phenomenon is referred to as the “Korea discount.” But a formal end to the Korean War and a peace regime on the Korean Peninsula will influence the local financial markets positively.

According to Bloomberg, the price earnings ratio of the Korea Composite Stock Price Index or KOSPI reached 11 times as of mid-April. It was almost half of that of the global average at 19 times. The ratio is to measure the overall valuation of the stock market compared to earnings. The lower the ratio, the more undervalued the stocks are. Geopolitical risks surrounding the Korean Peninsula contribute to this phenomenon, as more risks tend to increase instability and volatility in the financial market. But the declaration of an end to the war at the inter-Korean summit will highlight the potential benefits of investing in South Korea and therefore draw more foreign investors to the local bourse. A warm diplomatic breeze blowing in to inter-Korean relations has already been helping the South Korean stock market rise.

Amid rising expectations for more peaceful relations between South and North Korea on the occasion of the inter-Korean summit, the South Korean stock market continues its upward trend. On April 18, the benchmark KOSPI added 26.21 points to close at 2,479.98, the highest in a month since March 22. Shares related to construction and inter-Korean economic cooperation moved up across the board. Foreign investors turned to buying, purchasing a net 350 billion won worth of stocks in the KOSPI market on April 18, contributing to pulling up the index.

On April 18, the main bourse in South Korea reached a new high in a month, apparently influenced by U.S. President Donald Trump’s remarks the previous day, when he mentioned the possibility of an end to the Korean War. Thanks to growing expectations for an end to the 65-year-long ceasefire on the Korean Peninsula, South Korea’s credit default swap or CDS premium, which reflects a nation’s default risks, has reached its lowest rate in a month. If the leaders of the two Koreas reach a historic agreement to change the fate of this divided peninsula during their summit, the “Korea discount” will be eased and foreign investment in South Korea will increase. North Korea, meanwhile, is showing signs of a significant change.

Since the start of the Kim Jong-un regime in North Korea, the nation has concentrated all its energy into nuclear development, in line with its policy of pursuing the parallel development of nuclear weapons and the economy. But Pyongyang has announced its decision to focus more on the economy in the latest plenary meeting of the ruling Workers’ Party. North Korea seems to have concluded that an economic achievement, even without nuclear weapons, will guarantee security and maintenance of the Kim Jong-un regime. To rebuild the economy, North Korea is expected to speed up economic reforms and openness down the road. I think the North will make an all-out effort to lay the groundwork for becoming an economic power by 2020 by drawing foreign investment to its 21 economic development zones.

Last Friday, North Korea adopted a new strategic platform to shut down the Punggye-ri nuclear site and focus all efforts on economic development. This is a major shift from the nation’s nuclear policy, indicating that North Korea has officially shown its determination to take denuclearization measures. Also, North Korea may adopt Chinese-style reform and openness in the 1980s, raising hopes that the South Korean government could push for its new vision to build an inter-Korean economic community.

The Moon Jae-in government’s “new economic map for the Korean Peninsula” envisions building a three-axis economic belt that involves the Demilitarized Zone and traffic networks along the eastern and western coastal areas on the Korean Peninsula. The grand vision pursues economic growth of not only the two Koreas but Northeast Asia as well. If the establishment of a peace regime is agreed upon at the inter-Korean summit, the new economic map will take more concrete shape and subsequently facilitate massive development projects in North Korea. If that happens, foreign investors will certainly look at the Korean Peninsula as an attractive investment destination. More foreign investment in this region will help support South Korea’s economic growth, boost corporate investment and sharpen national competitiveness.

“The new economic map for the Korean Peninsula” is to reconnect the two Koreas, which have been divided by the Military Demarcation Line, through a new economic belt and to build an inter-Korean economic community, through which the two sides will prosper together. When the economies of the two Koreas are integrated through the market to form an economic bloc, South Korea will be able to secure a new growth engine, while North Korea can improve its tattled economy, where its per-capita GDP is a mere one-thousand-333 US dollars. To this end, it is essential to settle permanent peace on the Korean Peninsula. International eyes are on the result of the inter-Korean summit, which will be held in four days.