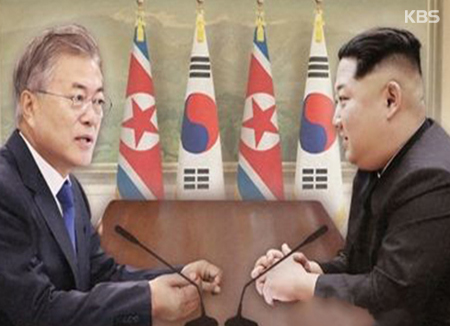 Following the 2018 summit between South and North Korea, expectations are running high for an era of “new inter-Korean economic cooperation.” Leaders of South and North Korea announced the “Panmunjom Declaration” last Friday to reach many significant agreements that would provide a breakthrough for developing inter-Korean relations further. Today, we’ll discuss the possibility of resuming economic cooperation between the two Koreas and the economic significance of the recent summit. Here is Lee Hae-jeong, researcher from the Unification Studies Center at the Hyundai Research Institute.

Even before the Panmunjom Declaration was issued, the so-called “Korea Discount” showed signs of improvement in the local stock market amid expectations for the inter-Korean summit. One of the encouraging developments in the latest summit is that it touched on the complete denuclearization of the Korean Peninsula. So, it is highly likely that global ratings agencies will upgrade South Korea’s sovereign ratings in the future. In the most attention-grabbing part in regards to economic cooperation between South and North Korea, the declaration specifies that the two sides agreed to actively implement the projects previously agreed upon in the October 4 Declaration in 2007 and to adopt practical steps towards the connection and modernization of cross-border railways and roads. These agreements will certainly provide positive momentum for laying the groundwork for new inter-Korean economic cooperation.

By demonstrating the two Koreas’ commitment to building a peace regime on their peninsula and achieving complete denuclearization, the 2018 inter-Korean summit is expected to ease geopolitical risks that have weighed down on the South Korean economy. Three major global ratings agencies have actually assessed that geopolitical risks in the region have been eased as a result of a recent improvement in inter-Korean relations. On the prospects for an end to the “Korea Discount,” South Korea’s benchmark stock index surpassed the 2,500 mark in an intraday session on April 27, when the inter-Korean summit was held. A positive mood is spreading to the local economy overall, with many expecting for brisk domestic demand, the resumption of the inter-Korean joint industrial complex in Gaeseong and more investment in social overhead capital projects. As a matter of fact, though, inter-Korean economic cooperation was not a major agenda item for last week’s summit talks. Still, the leaders of the South and the North did include their commitment to bilateral economic cooperation in the Panmunjom Declaration.

Before 2016, economic sanctions imposed by the U.N. on North Korea were not strong enough to affect the public livelihood in the communist nation. But since Pyongyang’s fourth nuclear test in 2016, sanctions have only become stronger to worsen the public livelihood in the North. I think the ever-intensifying sanctions have prodded North Korea into coming to the dialogue table. South Korea, for its part, finds it increasingly necessary to raise its potential growth rate amid the low birthrate and a rapidly aging population. The government needs to find a new growth engine through economic cooperation with North Korea, and this reason will prompt South Korea to discuss economic issues with the North.

Due to its nuclear weapons development, North Korea has been under strong international sanctions, which have blocked the nation’s trade of industrial materials like crude oil and iron as well as daily necessities. South Korea, on its part, is in a desperate need to find an economic breakthrough as it is apparently heading for a prolonged cycle of low growth. That is, economic cooperation between South and North Korea could be a new way out and the basis for common prosperity. At the recent summit, the two leaders agreed to reconnect cross-border railways and roads first.

The Gyeongeui rail line runs along the western part of the Korean Peninsula from Seoul to Sinuiju in North Korea. Part of the railway was reconnected after the first inter-Korean summit in 2000. Construction of this railway and the Donghae line on the eastern coast was finished in 2003 and 2004, respectively. The South Korean government had actually pushed for the connection of the transportation network in earnest. The network comprises three major economic belts forming an “H” on the Korean Peninsula. In the envisioned network, the vertical western belt will allow Koreans to reach China in a day’s trip, while the eastern belt will be linked all the way to the Eurasian continent through Siberia. And there is the horizontal Demilitarized Zone belt that connects east and west. South Korea is like an island now as its division with North Korea blocks its land route to the Asian continent. But the H belts will enable the nation to expand its economic influence to the continent.

The establishment of the transportation network linking the two Koreas and reaching Europe will visualize the so-called “new economic map of the Korean Peninsula” to pave the way for the two Koreas to prosper together. Speaking of common prosperity, Seoul and Pyongyang promised to actively implement economic projects agreed at the 2007 inter-Korean summit.

We need to recall the agreements reached in the October 4 Declaration in 2007. The agreements include social overhead capital expansion, resources development, creation of a special zone for bilateral reconciliation, peace and cooperation, completion of the first phase of the Gaeseong industrial park and start of the second-phase development, renovation of cross-border railways and roads, construction of the Anbyon and Nampo shipbuilding complex, direct air links between Seoul and Mt. Baekdu in North Korea and cooperation in agriculture, healthcare and environmental protection. The latest summit will boost the chances of resuming the suspended inter-Korean economic cooperation focusing on these areas. Notably, the two sides agreed to establish a joint liaison office in Gaeseong, raising the possibility of reopening the Gaeseong industrial complex.

If the agreements reached eleven years ago are implemented following the recent inter-Korean summit, the operation of the Gaeseong industrial park, which has been suspended since 2016, may resume. Also, a second and third inter-Korean joint industrial park could be built over the long term. For full-fledged bilateral economic cooperation, however, international sanctions on North Korea should be lifted first.

The recent inter-Korean summit marks the beginning of North Korea’s denuclearization. The new economic era of the Korean Peninsula depends on how the two Koreas will make efforts toward the complete denuclearization.