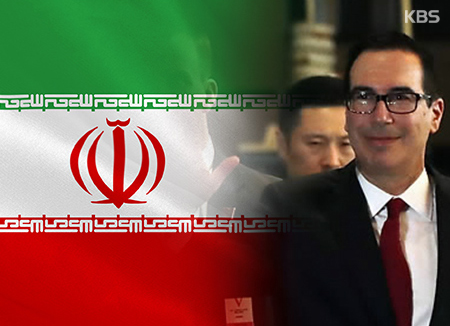 On May 8, U.S. President Donald Trump announced that the U.S. would withdraw from a nuclear deal with Iran and reinstate its economic sanctions against the Middle Eastern country. Washington’s decision is casting a dark shadow over the Korean economy, since it heightens the possibility of renewed geopolitical risks in the Middle East. Here is Professor Kim Gwang-seok from the Graduate School of International Studies at Hanyang University to give his analysis of the potential aftermath of Washington’s exit from the Iran nuclear agreement, from rising oil prices to sluggish exports.

It is a very disturbing situation. Let me explain what the Iran nuclear agreement is. Six countries—the U.S., Britain, France, Germany, China and Russia—lifted economic sanctions on Iran in return for its declaration to end its nuclear program. But now, Trump says the U.S. will withdraw from the international nuclear agreement. We’re concerned that Iran’s crude oil supply might be reduced if the sanctions are revived. In line with the principle of supply and demand, international oil prices may rise sharply if the supply is reduced while demand is maintained. As a major importer of crude oil, South Korea is deeply concerned about that.

Six regional powers, including the U.S., signed a nuclear agreement with Iran in July 2015, and economic sanctions on Iran were lifted in January the following year. But Trump announced last week that the U.S. would pull out of the nuclear deal and resume sanctions on Iran, saying that the deal cannot prevent Iran’s nuclear weapons development. Following the decision, international oil prices have been fluctuating. Iran is the third-largest oil producer among the members of the Organization of Petroleum Exporting Countries. If the oil-rich nation suffers from U.S. sanctions, oil supply will inevitably decrease. The benchmark West Texas Intermediate for June delivery in the New York Mercantile Exchange closed at 71.14 US dollars per barrel on May 9, up three percent from the previous day. That was the highest level in three years since November 2014. The rising international oil prices are feared to place a significant burden on South Korea.

South Korea depends 100 percent on imports for its oil and refines the imported crude oil within the nation. That is to say, South Korea imports crude oil and exports petroleum goods. So, imports of crude oil are seen as manufacturing costs. If oil prices rise, import prices and manufacturing costs will also go up, causing the prices of finished goods and consumer prices to go higher. High inflation may dampen consumption and investment to affect economic growth negatively. Prices at modest levels are desired, but excessive inflation could be an obstacle to economic recovery.

After international sanctions on Iran were lifted in 2016, South Korea’s imports of Iran’s crude oil increased significantly. Iranian oil accounted for 13 percent of Korea’s total crude oil imports last year, taking third place after Saudi Arabia and Kuwait. If the imports of Iranian crude oil decrease, Korea will face difficulties in oil supply and demand in the mid and long term. Global investors believe that Korea is vulnerable to rising oil prices, as it relies heavily on imports for its crude oil demand, and their exit from Korea may increase the volatility of the local foreign exchange market. There is another serious problem that may arise after the U.S. walks away from the Iran nuclear deal.

A U.S. domestic law called the National Defense Authorization Act bans many countries from trading with Iran. Fortunately, South Korea qualified for an exception to the sanction and it has continued with its trade with Iran. Korean businesses have received payments in Korean won via accounts named under the Iranian central bank managed by two Korean banks, Industrial Bank of Korea and Woori Bank. But if Korea fails to get exempted from the law after the U.S. revives its sanctions on Iran, the won-based payment system might be abolished. Korean businesses will then have great difficulty in trading with Iran. As we know, finance always works hand-in-hand with logistics. Without the support of finance, it is very difficult to handle the logistics process for exports and imports properly.

Enacted in 2012, the National Defense Authorization Act allows the U.S. to impose political or military sanctions on other countries for national security reasons. According to the law, foreign economic institutions conducting transactions with the central bank in Iran are prohibited from doing business with U.S.-based financial institutions. But the U.S. made an exception for South Korea, along with Japan, India, China and Turkey, in the application of the law in 2012. As a result, Korea has been able to trade with Iran, though in a limited way. But if it fails to qualify for an exception to the sanction this time around, Korea may have to stop importing oil from Iran and Korean businesses may not be allowed to settle accounts with their Iranian counterparts in Korean won. If Korean exporters cannot make payments in the local currency, they will get in trouble. Of course, these concerns have not become a reality yet, as economic sanctions on Iran will come with a three- to six-month grace period.

If Iran halts its nuclear program in some way or takes other measures to please the U.S. during the grace period, the U.S. may cancel the plan to resume sanctions on Iran. That means Iran will not stop economic exchanges with other countries right now but a final decision will be made after the grace period. We have to note that the U.S. is the only country that has decided to withdraw from the Iran nuclear agreement. It is doubtful that sanctions imposed by one country will actually influence international trade right away. When importers of Iranian oil join the sanctions, it will have a significant impact. But sanctions by a single country won’t.

While the U.S. declared its withdrawal from the Iran nuclear deal, other signatories such as Britain, France, China and Russia have said that they will continue to comply with the agreement. Also, the economic sanctions by the U.S. will resume after the grace period of between 90 days and 180 days. Considering these factors, the ripple effects may not be as serious as expected. But energy consulting firm Facts Global Energy predicts that international oil prices may rise to 100 dollars per barrel. On another negative note, the Iranian economy will contract considerably if other countries join the sanctions. If that happens, South Korea will suffer from a sharp decline in its exports to Iran, which amounted to four-billion US dollars last year. This will be an alarming sign for Korea’s outbound shipments overall. That’s why the government needs to devise some preemptive measures.

Rather than making an agreement solely with the U.S., South Korea should pursue policy cooperation with other permanent members of the U.N. Security Council, namely, Britain, France, Germany, China and Russia, so the U.S. will not choose a too drastic option. Washington’s radical measure will be a great shock to not only South Korea but many other countries doing business with Iran. It is important that the countries should speak with one voice to negotiate with the U.S. The Korean government needs to inform companies engaging in trade with Iran of the current situation so they can prepare against any abrupt suspension in trade as a result of the sanctions by the U.S. Korea will also have to diversify its export destinations, in addition to Iran.

The government held a meeting attended by officials from the government and private companies on May 9 and decided to create a taskforce to prepare for a setback in trade with Iran. The main job of the team is to closely examine the potential damage that South Korean companies may sustain and cooperate with the international community during the grace period. The business community, on its part, should pay full attention to the management of foreign exchange risks and diversify Korea’s export markets to overcome the difficulty of rising oil prices wisely.