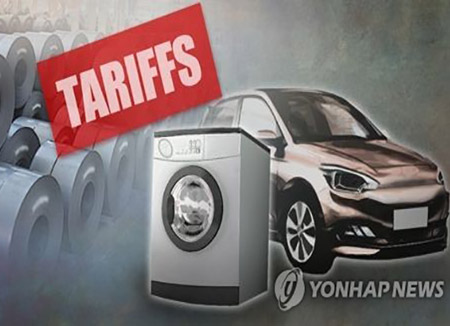 On May 14, the South Korean government filed a complaint with the World Trade Organization, or WTO, to challenge the United States’ safeguard tariffs on Korean washing machines and solar panels, in the belief that the measures are in violation of WTO rules. Here is Dr. Kim Hyung-joo at the LG Economic Research Institute to discuss the two countries’ trade row, which will now be dealt with at the WTO. First, Dr. Kim explains the background for South Korea’s recent action.

We need to examine the U.S.’ safeguard measures first. When deciding on the measures, the U.S. claimed that imported washing machines and solar energy products damaged local industries drastically. Citing this, the U.S. said that it would impose import restrictions on those products for the next three to four years. The safeguard tariffs are considered justifiable if those goods imported from other countries, including South Korea, truly harmed the local industries, as the U.S. maintains. But it is unclear whether imported products really hurt the local industries. Also, it is necessary to check whether American manufacturers of washing machines and solar panels are really in a difficult situation. South Korea and the U.S. held bilateral talks for the past three months to resolve the problem outside the WTO, but they failed to reach an understanding. So, South Korea has asked the WTO to settle the dispute.


In February, the U.S. government executed safeguard measures against South Korean washing machines and solar panels, saying that the imported goods damaged U.S. industries. Under the measures, 40 to 50 percent tariffs will be imposed on imported washing machines beyond a 1.2 million quota. Up to 30 percent tariffs will also be imposed on imported solar energy products exceeding a certain quota. After the safeguard measures took effect, the Korean government announced that it would take the case to the WTO. A safeguard action is implemented to protect a local industry from a sudden increase in imports causing serious harm to domestic production. But the Korean government believed that the U.S. measures fell short of demonstrating a clear link between increased imports of Korean goods and industrial damage in the U.S. Korea had engaged in bilateral talks with the U.S. to resolve the trade row through dialogue. But the U.S. refused to compensate for the potential damage on South Korean companies as a result of the safeguard tariffs. Korea therefore chose to file a complaint with the WTO to enter a lengthy dispute settlement process.

Korea and the U.S. held bilateral talks voluntarily, but they will have to hold another round of bilateral talks for one or two months in line with the WTO guideline. If they still fail to find a solution, they will enter the hearing process. If the two sides accept the ruling in the first hearing, the dispute settlement process is over. But in most cases, disputes move on to the second hearing, where the final ruling is made. The two sides then should accept the result.

Now that it has filed a complaint with the WTO, Korea will hold bilateral talks with the U.S. as the first stage of the dispute settlement process. If the two parties fail to reach agreement within 60 days, the Korean government can request the WTO to create a panel. Typically, it takes a year to organize the dispute settlement panel, and it takes two to three years for a final ruling to be made. Korean exporters will inevitably endure losses during the period, as their products will be 20 percent more expensive in the U.S. market due to the tariffs. Having these concerns in mind, the Korean government hopes to resolve the problem in bilateral talks. But the prospects are not bright.

The possibility of solving the dispute through bilateral talks is slim. Many countries, including the U.S., have taken safeguard measures not because they followed principles but because they wanted to buy some time. It will take a considerable amount of time for the U.S. to follow the WTO’s ruling and withdraw from its safeguard action, which has already come into effect. U.S. industries will be protected at least during that period. To gain an advantage over Korea, the U.S. will probably drag its feet for as long as possible and move on to the second hearing.

It is difficult to resolve the dispute through bilateral talks. That happened only once among many petitions filed by the Korean government. The case was about Korean exports of color TVs to the U.S. in 1997. If the past is any guide, Korea is widely expected to undergo the lengthy procedures of the first ruling, an appeal and the second ruling before the final decision is made.

The chances of Korea winning the case are high, considering that the U.S. seems to have introduced the safeguard action without any good reason. When we see the financial statements and the market share of U.S. washing machine manufacturer Whirlpool, it’s hard to say that its profitability has deteriorated so much that it would lead to the risk of insolvency. The American appliance maker has a number of subsidiaries in other countries, including China, Vietnam and Brazil, and they have been performing well. In brief, it doesn’t seem the U.S. fully met the conditions for taking safeguard measures, and there’s a good chance that Korea will win the case.


Among the 11 petitions filed by South Korea with the WTO against the U.S., eight cases were ruled in favor of Korea. This time, too, the Korean government is confident about the result. The problem is that it is a long process and the U.S. may not follow the ruling properly. The U.S. has actually withdrawn a safeguard action only after it fully used the three-year period permitted by WTO rules. Also, on a negative note, the U.S. has denied the authority of the WTO since the inauguration of the Trump administration. Moreover, a decision made by the WTO is considered a recommendation, so the WTO cannot force a nation to comply with its ruling. Even so, Dr. Kim says that using the WTO actively is a practical trade strategy for a small economy depending heavily on exports, like South Korea.

It is only natural that the Korean government brought this case to the WTO. Filing a complaint with the WTO is an act of exercising a right on one hand, but it is also a duty on the other hand. WTO members need to encourage each other to follow the WTO principle of free and fair trade. Unfortunately, the U.S. is disrupting the order. If other nations overlook the practice just because WTO rulings may not work, the U.S. might abuse freedom, which is more like indulgence. Korea needs to send a certain signal to the U.S. by calling attention to problems actively, even if the process may take time and give rise to some difficulties. The U.S. will then think that South Korea challenges unreasonable safeguard actions or anti-dumping measures quite tenaciously so it should be more careful in taking trade protectionist measures against South Korea. Korea needs to keep sending this signal to the U.S.

South Korea is the first country in the world to file a complaint with the WTO over Washington’s safeguards since the Trump administration took office. It shows the Korean government’s strong commitment to actively responding to unfair import restrictions. With the move, South Korea is expected to employ a stronger trade policy. But it is difficult to break through the barrier of trade protectionism only through a particular policy. The government should increase its negotiating power through cooperation with other affected countries and a concerted response to Washington’s move, while making constant efforts to diversify its export markets by enhancing the competitiveness of local companies.