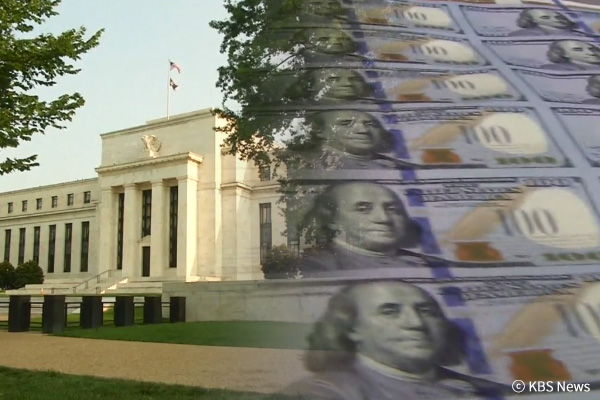 The U.S.’ benchmark interest rate has topped 2 percent for the first time in ten years since the global financial crisis erupted in 2008. The U.S. Federal Reserve raised the key interest rate on June 13 for the second time this year, following a 0.25 percentage point hike in March. But what grabs more attention is the Fed’s next move, as eight of the 15 Fed members now expect a total of four interest rate increases this year. Today, we’ll hear from Kim Gwang-seok, professor at the Graduate School of International Studies of Hanyang University, who gives his analysis of the potential ripple effects of the U.S.’ accelerating rate hike move.

Last week, the U.S. Fed raised the fed fund rate by 0.25 percentage point to a range of 1.75 percent to 2 percent. It also signaled two more rate hikes in the second half of this year, lifting the yearly total number of hikes from the previous projection of three to four. Not surprisingly, there are concerns about the drastic rate increases. The interest rate difference between South Korea and the U.S. has already been reversed because Korea’s key interest rate has remained unchanged since last November. Now, the rate gap has become even wider as a result of the Fed’s latest rate hike. Attention now turns to whether South Korea will raise its own rate to keep pace with the momentum in the U.S.

The Fed’s recent rate increase was widely anticipated, considering that projections for economic growth, inflation and the job market in the U.S. have improved, compared to March. The problem is the faster-than-expected rate increase timeline, with another hike in just three months lifting the U.S. key rate to the upper range of 2 percent. South Korea’s base rate has remained at the current 1.5 percent since November last year, and the rate gap between Korea and the U.S. has now widened to 0.5 percentage point. In this situation, two additional rate hikes by the U.S. over the rest of the year will widen the rate difference even further. The steep U.S. rate increases are emerging as an unstable economic factor for developing countries. Let’s hear again from Professor Kim.

A hike in the U.S. key interest rate means a rise in the value of the U.S. dollar. If the U.S. continues to raise its policy rate, while emerging economies freeze their rates, their currencies will weaken against the stronger greenback. This may possibly trigger capital outflows from emerging markets in the short term and their devalued currencies may prompt more investors to pull their money out of the markets, contributing to currency crises in those countries. Many are concerned about possible financial turmoil in some emerging economies.

The financial markets in emerging economies are fluctuating due to the latest U.S. rate hike. The Argentine peso fell 1.95 percent on June 13 to close at a record low of 26.26 pesos per one U.S. dollar. The central bank in Argentina has raised its interest rate by 6.75 percentage points to prepare against a plunge in the value of the local currency, but it has failed to prevent foreign money from flowing out of the country. Local currencies in major emerging markets such as Brazil and Turkey have also fallen by more than 10 percent, compared to early this year. Given that a chain of crises in emerging economies will come as a shock to the global economy, analysts are concerned about the possibility of the revival of the 2008 global financial crisis or the 1997 Asian financial crisis. Amid the financial instability in emerging markets, South Korea is also wary of the impact of the U.S. rate hike on its financial market. Here again is Professor Kim.

Capital outflows from emerging economies are evident, and the widening interest rate gap between South Korea and the U.S. is feared to cause an outflow of foreign capital from Korea. But South Korea hasn’t seen any clear sign of a capital flight for now. Amid a solid recovery of the South Korean economy, geopolitical risks on the Korean Peninsula have been alleviated and expectations are running high for economic cooperation between South and North Korea. These macroeconomic factors indicate that South Korea is unlikely to suffer from capital movements. But from a mid-and long-term perspective, Korea isn’t entirely free from the concerns over capital outflow, since the U.S. is expected to keep raising its interest rate, while Korea finds it difficult to take the same measure.

The Korean government convened a financial policy meeting on June 14 to focus on easing market volatility. The government believes that the possibility of a rapid capital outflow is low, citing the nation’s current account surplus for 74 consecutive months and sufficient foreign reserves that amount to nearly 400 billion US dollars. However, Professor Kim reveals why the Bank of Korea is under mounting pressure.

In line with the U.S.’ move to raise its key interest rate, Europe and Japan also find it necessary to follow suit to keep up with the stronger dollar trend. That means the U.S., Europe and Japan are all shifting from the previous easy-money stance to monetary tightening. Against this backdrop, South Korea also needs to move in the same direction. But Korea is in a tricky situation because the nation’s economic recovery is not fast enough to tighten its monetary policy.

On June 14, the European Central Bank announced plans to end its quantitative easing program by the end of this year. On the same day, the Bank of Japan decided to reduce the purchase of three- to five-year government bonds, indicating that it will take belt-tightening actions. While major economies are changing their monetary policies from quantitative easing to quantitative tightening, it is difficult for South Korea to raise its base rate hastily. A rate hike will worsen the problem of the nation’s massive household debt that surpasses 1,400 trillion won, or roughly 1.3 trillion US dollars. The government also has to consider inflation and exports, which do not seem to be very optimistic. But regarding the interest rate gap between Korea and the U.S., the government cannot leave this problem unattended, with market jitters in emerging economies spreading. If South Korea freezes its key rate in July or August, and if the U.S. raises its rate again in September, the rate difference will widen to 0.75 percentage points. The U.S. Fed has signaled two additional rate hikes in the second half of the year, so South Korea is also expected to lift its interest rate. Let’s hear again from Professor Kim.

South Korea may raise the interest rate in July or August in the third quarter or in October or November in the fourth quarter. The U.S.-Korea rate difference has already reversed, so it will be important to adjust the rate gap at an appropriate level. Many are expecting that an additional rate hike will take place in the U.S. in July or August. I imagine South Korea will take the same action during the same period so the interest rate gap will not widen further.

Reflecting worries over possible fallout from the U.S. interest rate increase, Korean stocks ended lower and the Korean won depreciated against the dollar on June 14. Market observers predict that the Bank of Korea may raise its interest rate in order to reduce the side effects of the widening rate gap between Korea and the U.S. They’re paying attention to the decision to be made by the central bank’s monetary policy committee next month.