SJ CORE, an Exporter of Korea’s Popular Snack of Tteokbokki 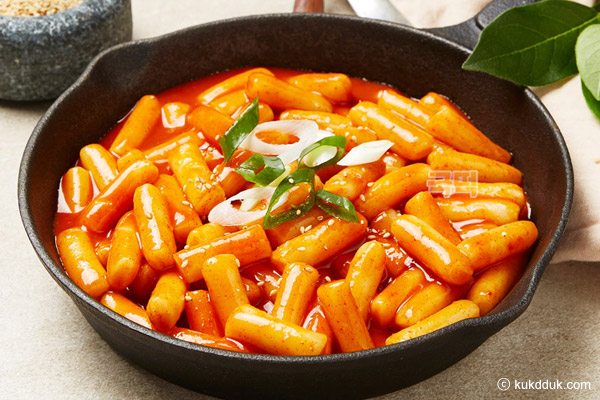 The company was created in 2012 as a manufacturer of tteokbokki products in the name of “Cook-Tok Original.” Personally, I ran a consulting firm, which had nothing to do with food, for six years before I set up this company. Besides, I didn’t really like tteokbokki. But one day, I happened to eat tteokbokki made of wheat flour cakes and I was fascinated with it. I thought anyone would love this food since it appealed to a person like me who didn’t even like the snack. While doing business, I felt that the representative food of Korea was not so much kimchi or bulgogi but tteokbokki, which could be adored by people the world over. As time went by, I became more confident about that.

Tteokbokki is usually made from rice cakes cooked with a spicy pepper sauce. When Mr. Seo tasted a different version made of wheat flour cakes with a softer texture, which was harmonized with Korea’s famous hot chili paste of gochujang, he reminisced about his school days. On his way home from school back then, he would eat tteokbokki with his friends at a snack stand near the school. The chewy rice cakes perfectly seasoned with a hot and spicy sauce and salty fish cakes captivated the young boy. Recalling the old memories, he decided to commercialize the traditional dish. He put a great deal of effort into creating old-style tteokbooki made of wheat flour cakes with soup, which he had enjoyed when he was in elementary school. Mr. Seo continues.

As I wasn’t a food specialist, I had to run around on my own two feet to develop food products. I visited more than 20 rice cake factories as well as sauce manufacturers. But there was no factory producing wheat flour cakes, making it difficult to develop a product. I took over a small factory, where I steamed hundreds of bags of wheat flour cakes with my friend to find out the most appropriate length and thickness of the cakes. After a few months of hard work, we were finally able to make ideal wheat flour cakes. We also had to purchase fish cakes, as we couldn’t produce them on our own. Fish cakes were generally sold in large quantities, but we needed the food in small packs with reasonable prices. After asking all around, we managed to secure what we wanted. That’s how our products were created.

He experimented with wheat flour cakes countless times and poured immense effort into developing sauces so consumers can revive the dish’s traditional spicy and sweet taste even when they cook it at home. He visited fish cake factories all around the country to find out best-quality fish cakes, which would add flavor to tteokbokki with enough soup. As a result, he successfully developed soft and smooth wheat flour cakes and special sauces that allow consumers to adjust the levels of spiciness and sweetness as they wish. What is better, the recipe is even simpler than that of the instant noodle dish ramen. He knocked on the door of distributors, filled with confidence that his new product, which was certainly different from existing ones, would be well received in the market. But Mr. Seo says that things didn’t turn out as expected.

At first, we tried to sell our products to retailers, not directly to consumers. But the retailers didn’t like the products, taking issue with their difference from previous tteokbokki items. We thought of that very difference as our strength, but the retailers didn’t. Rather, they complained of the long name of our products, the fact there was no photo of tteokbokki on the packaging, and the price. They also asked me why the products needed to include fish cakes. While I believed those features were our strengths, the retailers regarded all of them as shortcomings and refused to accept our products. Still, I posted them on the Internet. That was six years ago. There was no particular response from the online market, though. But sales began to increase sharply on group purchase Internet sites used by housewives. Guess what? We didn’t carry out marketing activities at all. I discovered how powerful female consumers were. Based on the word-of-mouth sensation, we were able to expand our sales in the online market.

Despite the cold response from distributors, Mr. Seo began to sell the products online in 2012. There were hardly any advertisements or marketing campaigns, but housewives began to post positive reviews on online cafés or group purchase websites after trying SJ CORE’s delicious tteokbokki that evoked memories of their old school days. From then on, tteokbokki with the brand name of “Cook-Tok Original” sold like hot cakes through word of mouth. The products were so popular that the company couldn’t meet the rising demand even though it manufactured them all night. The accumulated online sales surpassed one million packs in 2014 and the figure jumped to three million packs in the following year. On the back of the brisk sales in the domestic market, SJ CORE started to export the products overseas in 2014. Its export market has now expanded to the entire world, including the Americas, Canada, Australia, New Zealand, Europe and Southeast Asia, with the company’s outbound shipments in 2015 tallied at two million US dollars. Mr. Seo explains that the secret of success lies in the unique Korean flavor. 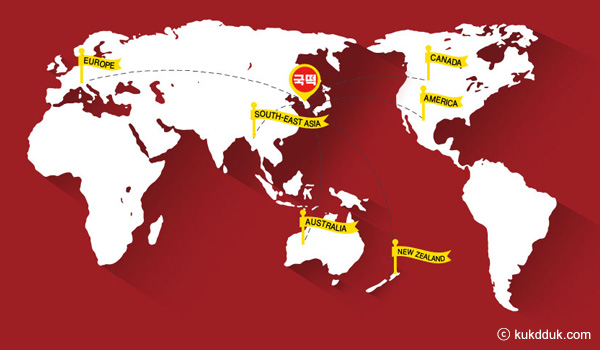 At a free sampling event in South America, not only ethnic Koreans but local people also liked our products very much. When the event led to increasing sales, I thought tteokbokki could become a global food item. We just focused on the Korean flavor, and it turned out that the flavor pleased the foreign palate as well. I’m not sure this comparison is appropriate, but the hugely popular boy band BTS is mesmerizing foreign fans with a Korean music style. On a similar note, I think traditional Korean tteokbokki can appeal greatly to foreign consumers.

A number of Korean food products have been introduced in the global market, thanks to the popularity of Korean pop culture overseas and growing interest in Korean cuisine. Most of the Korean dishes in the overseas market employ a localization strategy tailored to the taste of local people. In contrast, SJ CORE adheres to the Korean flavor, only adjusting the levels of spiciness, in the belief that foreign consumers pay attention to Korean food because of its own unique taste. In the case of tteokbokki, in particular, the company was convinced that the Korean taste should be kept intact, since the traditional spicy and sweet taste has long attracted consumers of all ages in Korea. With its steadfast philosophy about tteokbokki, SJ CORE is creating a stir in the export market. Mr. Seo says that his company will continue to grow as an expert on this popular Korean snack.

As a matter of fact, it is consumers who named our products “Cook-Tok.” As Cook-Tok products became popular, some proposed to produce new food items with the same brand. But as a tteokbokki maker, we’ll only focus on tteokbokki products and diversify its versions. For example, our “Cook-Tok rice cup” can be stored at room temperature, unlike our previous frozen products. It is difficult for consumers in Southeast Asia to enjoy our original products due to the inadequate cold chain system for frozen and refrigerated goods in the region. In general, it isn’t easy to store rice cakes and sauces at room temperature for ten months. But we managed to develop the technology to preserve food at room temperature, and these products are quite charming. See? There are lots of things to do with tteokbokki alone. So our company will concentrate on this item for the time being and establish itself as a solid tteokbokki provider.

By diversifying tteokbokki versions and relevant technology, SJ CORE is turning the food into a global snack. The company is exploring the world market with the distinctive Korean flavor.