“The Love of Dunhuang” by Yun Hu-myong 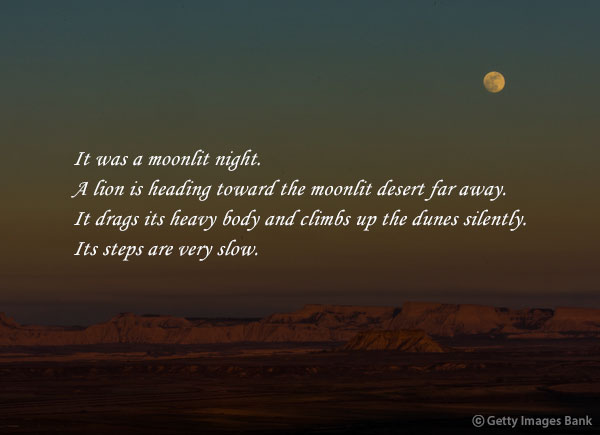 Yun is a writer who consistently wrote about discovering individual self ever since his debut. He has shown in his works his journey to find himself, hoping that each of us would find his or her true, original nature that has been lost over time or forgotten in real life. “The Love of Dunhuang” illustrates Yun Hu-myong’s inescapable destiny as a novelist and poet.

It was a moonlit night. A lion is heading toward the moonlit desert far away. It drags its heavy body and climbs up the dunes silently. Its steps are very slow.

The lion heedlessly takes one step after another with its four feet. The footsteps are erased in the sand. When the moon shines even brighter, the moonlight adheres to the whole body, like a tooth crowned in silver with glue. Not a single light flickers until the end of the boundless horizon.

The desert of time is also endless. The lion keeps its eyes on its feet as it takes one step after another.

The last passage, where the lion walks toward the moonlit desert, where the lion passes Loulan and Dunhuang, going on an endless journey is the highlight of the story. The main character is dreaming of becoming a lion himself and of a liberated lion traveling over the desert. This may be a fantasy, but, when asked, “How should we live our lives?” the writer answers that we should live our lives as the lion did at the end of his story.

Yun Hu-myong: Yun Hu-myong debuted as a poet when his poem “Bird of Glacier” won the Kyonghyang Shinmun Literature Prize in 1967. In 1979 he was awarded the Hankook Ilbo Literature Prize for his novel, setting him on the career path of a poet and novelist.

His “The Love of Dunhuang” is applauded as a novella that depicts the melancholy and despair of the contemporaries through its poetic atmosphere and beautifully sensual narratives.