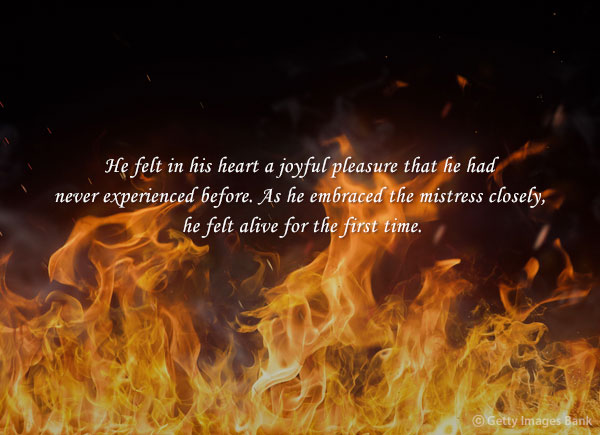 There was a mute servant named Samryong at that house. He wasn’t tall, so he looked rather dumpy, and his neck wasn’t long, as if his head was attached directly to the torso.

He used to have something like a ponytail, which he had cut off at the order of his master, but his hair puffed up at all times much like chestnut burs.

Na Do-hyang, who had shown romanticist tendencies when he first published his stories, turned his creative orientation to realism in later years. “Samryong the Mute” was a story situated right in between the two. It had detailed descriptions of reality and a romantic love story added on top of it.

The young mistress abused by her new husband. Samryong just couldn’t understand. How could the young master be so cruel to such a lovely, angelic wife! The sympathy and concern for the new mistress that sprouted in Samryong’s heart soon turned into an inexplicable feeling.

That’s when he spotted the mistress lying under a cover, determined to die in the fire. He grabbed the mistress. But there was nowhere to go. Left with no other option, he went up to the roof.

He felt in his heart a joyful pleasure that he had never experienced before. As he embraced the mistress closely, he felt alive for the first time.

I think Samryong saved his mistress and then died of over-exertion. That’s what completes the tragically beautiful story. Sacrificing one’s life for another is, in a way, saving the world. If I could sacrifice myself for the person I love very much, I could happily give my life.

Na Do-hyang (1902~1926): Born in Cheongpa-dong, Seoul. Started writing professionally by launching in 1922 a literary magazine named Baekjo with fellow writers Park Jong-hwa, Hong Sa-yong, Lee Sang-hwa, and Hyun Jin-geon. “Samryong the Mute,” published in literary magazine Yeomyeong in 1925, is counted among Na’s most famous works, along with “The Waterwheel” and “Mulberry.”