“The Snail of Sunday” by Choi Ok-jeong 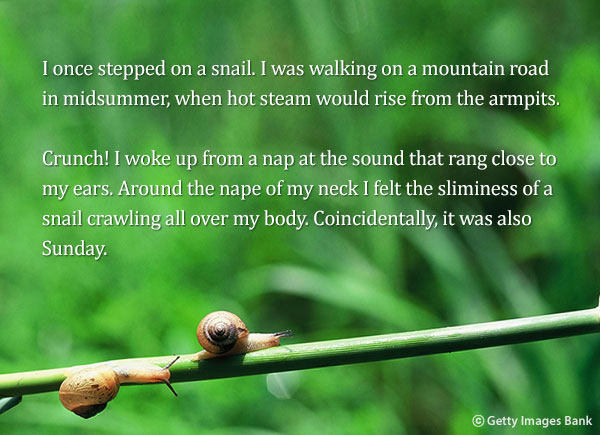 I once stepped on a snail. I was walking on a mountain road in midsummer, when hot steam would rise from the armpits.

Crunch! I woke up from a nap at the sound that rang close to my ears. Around the nape of my neck I felt the sliminess of a snail crawling all over my body. Coincidentally, it was also Sunday.

“The Snail of Sunday” starts off with the main character waking up from the dream of stepping on a snail. She had fallen asleep while reading a book on the sofa one Sunday afternoon.

It’s amusing, well-written, and describes in detail the inner world of a career woman living in today’s Korean society, a woman trying to live a lonely yet independent life. She also represents other women living in this age as someone who has a direct insight into her life and a resolve to live a more open life.

You felt different from the first day that I sat on the seat. The height, width, and size were a perfect fit, as if you were custom-made for me. Through you I learned that a bicycle can be this comfortable, that a machine too can understand the human body.

“The Snail of Sunday” continues in monologue style, with the main character talking to the bicycle.

Are you saying I’m blabbing too much? Okay, this exaggerated emotion is the symptom of Sunday. Completely messed up.

Why is my heart so bothered? Even when I lie down quietly, my heart seems to have jumped out of my body and wander about somewhere.

Choi Ok-jeong: Born in 1964 in Iksan, Jeollabuk-do province, debuted in 2001 by publishing “House of Memory” in literary magazine Korean Novels in 2001. Winner of the Heo Gyun Literary Writer Award and the Ku Sang Literary Awards’ Young Writer Prize. “The Snail of Sunday” was published in December 2017 as part of the short story collection titled “I Met an Old Woman.”