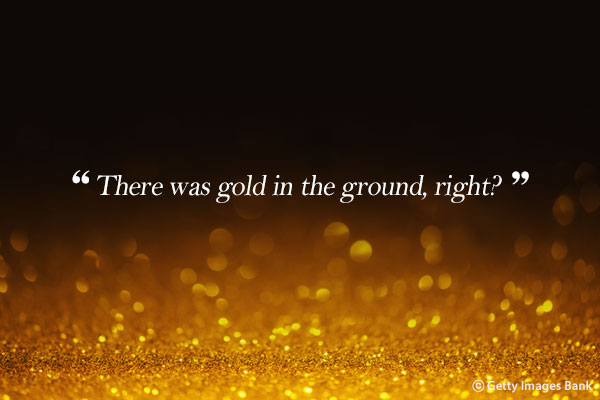 Kim has no equal in Korean literature history in terms of satire and humor. This story demonstrates the true value of this writer. This short story has both his demeaning view of farmers who wanted to escape from their destitute lives by striking gold and his sympathy and compassion for them.

It would be wiser to dig for gold than to get a few bushels of beans in return for a year of hard work. A day of good digging would bring more money than the beans harvested after toiling for a year. I’d rather be a man and go ahead with this venture, whatever the results may be, than to live on miserably like this.

It was beyond the wife’s wildest dream to find gold in the bean patch. The thought of eating dried pollack that she had craved so much made her heart almost explode.

Yeong-shik probably knew that the get-rich-quick dream was absurd. But his lot in life was so dire that he couldn’t help but expect a run of good luck. His wife also egged him on, dreaming of a richer life. With the hopes and expectations of Yeong-shik and his wife running high, his search for a gold vein in the bean patch began.

Yeong-shik hastened over to Su-jae. He hurriedly took the soil and combed through it to discover the reddish clay that he had never seen before.

“Come and look. He says this is gold,” Yeong-shik calls to his wife.

“There was gold in the ground, right?”

When the elated Yeong-shik’s wife was dreaming of having fish and living in a grand mansion, Su-jae confidently answered, “Yes, we’ll get 50 won per bushel,” while thinking that he would definitely run away that night.

Kim Yu-jeong (1908~1937): His writing career began when his story “Rain Shower” won an award in a short fiction contest sponsored by Chosun Ilbo in 1935. “The Golden Bean patch” was published in literary magazine Gaebyeok in the same year. Until his death at age 29, he published nearly 30 stories, including “Spring, Spring,” “The Golden Bean Patch,” “Camellia Flower,” and “Wretched Lives.”