"Over the Border" by Jeon Sung-tae 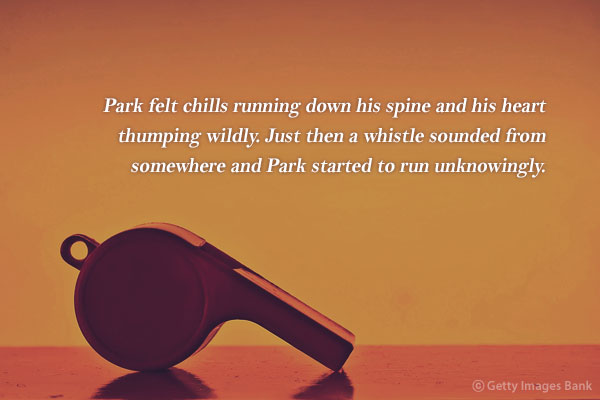 The bridge, generating a cloud of dust at every step, appeared very dilapidated for a border bridge. Although covered over with grey paint, the railing sported clear bullet holes. He turned around to see there were several such marks. There were bullet marks everywhere his eyes turned, just like a series of sores is revealed when the sleeve is rolled up. Park felt chills running down his spine and his heart thumping wildly. Just then a whistle sounded from somewhere and Park started to run unknowingly.

I Korea, crossing the border is an act that can strike a fear of death in people, like feelings refugees get when they cross over the borders. Since the sound of whistle represents an urgent signal, when Park heard that sound, the fear in his unconsciousness was brought back all at once. That feeling comes from living in a divided country.

The sound Park heard came from a toy whistle blown by a child. The only person who realized that it was the sound of a whistle that made Park run was the German tourist, Jan. He was also the one who explained the situation to the police.

“I heard that many North Koreans are dying. Is it true that many children are suffering because of economic hardship?”

“How can you smile at that?”

Unexpectedly, he asked in a disapproving tone. When Park straightened his face and sat up, Jan had already turned away from him, with his eyes staring out the window. Park was dumbfounded that facial expression, not language, had caused the misunderstanding.

Although Park and Jan share the experience of living in a divided country, there were clear differences in communication or expression between the two, as if a sort of a border was separating them.

Jeon Sung-tae: Born in Goheung, Jeollanam-do Province in 1969. His writing career began when his short story “Chicken Chase” was published in 1994, and his first collection of short stories titled “Maehyang매향” or “Burying Incense” was released in 1999. “Over the Border” was published in literary magazine Literature & Thought.