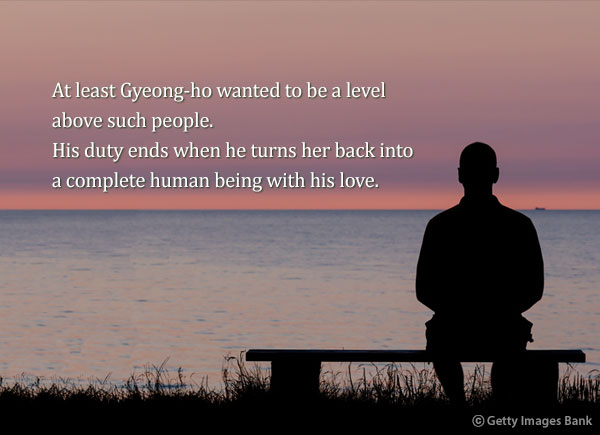 “Jetoiseon” refers to food left over from a memorial service. That is the life of the main character, Park Gyeong-ho. He was a promising medical student, but got arrested for being involved in an ideological movement. He was sentenced to prison term, but was released on probation. Although he didn’t have to serve his sentence, he couldn’t go back to school either. That’s exactly what “jetoiseon” stands for.

At least Gyeong-ho wanted to be a level above such people. His duty ends when he turns her back into a complete human being with his love.

Park Gyeong-ho thinks its his new duty to save Hyang-ran from drug addiction.

Hyang-ran was lying on the bed with her eyes closed. There were no cotton swabs or syringes at the bedside, but a used one-cc ampule with a broken neck was left in the ashtray.

Gyeong-ho tried to run out of the room. But Hyang-ran, who had not said a word until then, suddenly stood up and grabbed the end of his jacket. He stood there looking out the window with her holding on fast to his two legs.

Ha, ha, ha. This is the subjective conscience of an ordinary citizen.

Gyeong-ho let out his rage at Hyang-ran, feeling betrayed that she kept using drugs behind his back. But he could not forsake her, who was desperately clinging to him. “Jetoiseon” ends with Gyeong-ho’s cynical monologue. “Ha, ha, ha. This is the subjective conscience of an ordinary citizen.”

Kim Nam-cheon: Kim Nam-cheon was born in Seongcheon, Pyongannam-do Province in 1911. He became an active member of the Joseon Proletariat Arts Alliance’s Tokyo chapter as he entered Hosei University in Japan in 1929. His first review, “Re-appreciation of the Starting Point of the Cinematic Movement,” was published in 1930 and his professional writing career took off as his play “Jojeongan” and novel “Factory Newspaper” were released. “Jetoiseon” was published in literary magazine Jogwangin 1937.