"Talking to a Stranger" by Eun Hee-kyung 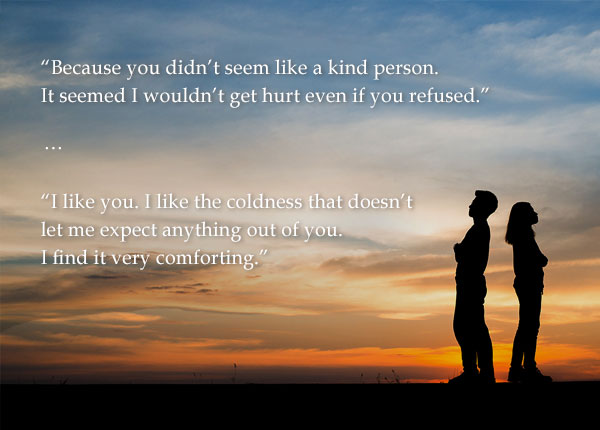 When we try to call someone from behind, we use a name. But she was a little unusual. When she calls someone, she doesn’t call by name, like most people do. She uses a nickname she made up or a language known only to her.

But I think the reason she is so unfortunate lies in the weird way she communicates with others.

The main character “I,” a complete individualist, and the woman, who is disturbingly kind and dependent on others. In “Talking to a Stranger” the leading male character describes the woman’s actions, which are incomprehensible to him.

“When I first went to ask you to accompany me to the gynecologist, do you know why I chose you?”

“Because you didn’t seem like a kind person. It seemed I wouldn’t get hurt even if you refused.”

“I like you. I like the coldness that doesn’t let me expect anything out of you. I find it very comforting.”

As I was trying to light up a cigarette, I suddenly realized that we were in a hospital room, so I put the cigarette back in the pack.

“How can you live so cold-heartedly like that? Aren’t you running away because you are actually scared?”

The woman thought that he didn’t refuse her because it was her, but that he would refuse everybody. He doesn’t act like a hypocrite, so she figured that she wouldn’t get hurt that much. This is the writer’s scathing criticism toward the people living in today’s society.

Eun Hee-kyung: Born in Gochang, Jeollabuk-do Province in 1959. Her short story “Duet” won the Dong-A Ilbo Literature Award in 1995, launching her on a professional writing career. In the same year she won the Munhakdongne Fiction Award for her novel “A Gift from a Bird” and two years later her short story collection “Talking to a Stranger” won the Dongseo Literature Award. .