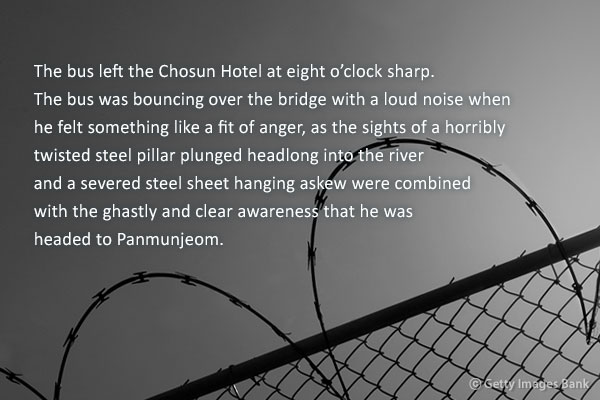 The bus left the Chosun Hotel at eight o’clock sharp.

The bus was bouncing over the bridge with a loud noise when he felt something like a fit of anger, as the sights of a horribly twisted steel pillar plunged headlong into the river and a severed steel sheet hanging askew were combined with the ghastly and clear awareness that he was headed to Panmunjeom.

When the bust arrived at Panmunjeom, the smell and graceful aura of the foreigners, who had appeared so striking inside the bus, seemed to crumble. Perplexed from all the unfamiliarity, everyone, with an ashen face, was simply wandering around Panmunjeom.

While South Korean reporters were taking pictures of Panmunjeom, North Korean journalists entered the room. Those who had met before began chatting. But the conversation was obviously chilly and empty of substance, filled only with a sense of superiority and subtle derisions toward one another.

“Don’t rely too much on such a feeling as compassion. Think about all those people around you suffering from poverty.”

“No way. Everyone around me is well-off. The problem is that they’re too rich and too heavy. They’re bogged down with too many miscellaneous things. You are the ones who are impoverished. All you are left with is a red body.”

“You are so pigheaded.”

She evaded with an expression laden with the guarded defensiveness typical of South and North Koreans who meet here. Jin-su stared at her back as she walked away.

“What a girl. She’s pretty good. Quite nice.”

Panmunjeom is an important place in the modern history of the Korean Peninsula, because it was the only place where the two sides can face each other. What is important in the story is not the meeting that takes place at Panmunjeom, but various characters who come from both sides to cover the event. The North Koreans who came to Panmunjeom in 1960 were portrayed as rigid and principled people adhering to their ideology. On the other hand, people from South Korea represented corrupt prosperity and materialistic capitalism and indolence.

He debuted as a writer by publishing the short story “Leaving Home” in literary magazine Literary Art in 1955.