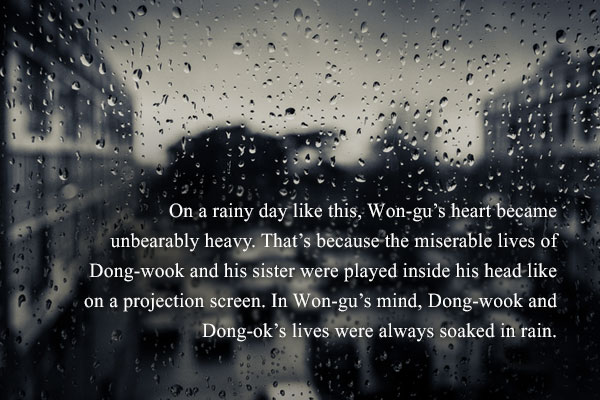 Because Son had to bear the scars of war, it was not surprising that he came to dislike humans and wrote stories that criticized the world. He provided detailed, almost microscopic descriptions of people who had lost all hope and a dismal world without future visions. That’s what made Son Chang-sop’s stories the most bizarre and bleak novels in Korean literature history.

On a rainy day like this, Won-gu’s heart became unbearably heavy. That’s because the miserable lives of Dong-wook and his sister were played inside his head like on a projection screen. In Won-gu’s mind, Dong-wook and Dong-ok’s lives were always soaked in rain.

Won-gu wasn’t making much money off of his street peddling because of the rain. Then, he suddenly got worried about Dong-wook and Dong-ok, so he left home despite the pouring rain. When he got to the sibling’s house, he was stunned to find a new landlord, who told him that he didn’t know where they had gone.

Strangely, Won-gu was stunned to hear him say that such a pretty girl wouldn’t die of starvation for she could sell herself. He felt rage welling up inside of him, furious enough to almost accuse the landlord of selling off Dong-ok. But he couldn’t bear the weight of his body, pressing down on him like thousand pounds, so he just turned away without saying a word.

He felt a chill at the delusion that the sound of furor, “You thug, you sold off Dong-ok,” was flying toward him from far, far away. Won-gu wobbled along the road covered with pumpkin vines like a man who had just recovered from an illness.

Won-gu probably realized that his rage was directed not at the landlord, but at himself. That is why the thought of his friends depressed him on rainy days.