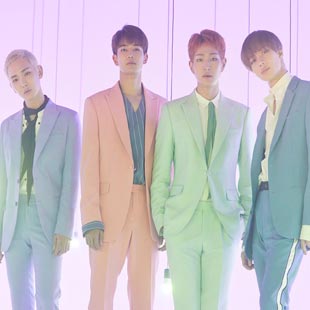 Shinee, stylized as SHINee, is a South Korean boy band that debuted under SM Entertainment in 2008. The group has four members; Onew, Key, Minho and Taemin. Originally, the group had five members, but Jonghyun died in December 2017. The group's popularity in Korea has earned them numerous accolades and the title "Princes of K-pop.” The group was introduced as a contemporary R&B boy group with the goal of being trendsetters in all areas including music, fashion, dance etc. The group formally debuted in May 2008 with their first EP “Replay.” The group is regarded as one of the best live vocal groups in K-pop and is known for their highly synchronized and complex dance routines. In May 2018, the group announced they will be releasing a three-part Korean album titled “The Story of Light.”