S. Korea and N. Korea to Face Off in World Cup Qualifiers 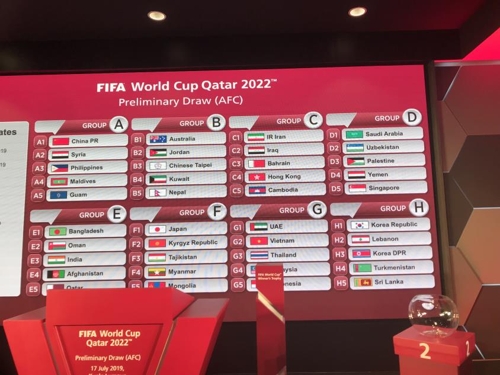 Anchor: South Korea's national football team will be facing North Korea in the second round of the 2022 Qatar World Cup qualifiers. An inter-Korean match scheduled for October 15 could take place in Pyongyang.
Daria Kim has more.

Report: In a draw to determine the 2022 Qatar World Cup Asian qualifying match schedule at the Asian Football Confederation(AFC) headquarters in Malaysia on Wednesday, South Korea ended up in the same group as North Korea.

The two Koreas were placed in Group H, along with Lebanon, Turkmenistan and Sri Lanka. AFC rules say each team plays twice in a home-and-away format in these World Cup qualifiers.

South Korea will kick off its quest for the next World Cup with an away match against Turkmenistan on September 10. An away game against North Korea is set for October 15.

If the game proceeds as scheduled, the fixture would be the first men's national team match between the two Koreas held in Pyongyang in 29 years. The last one was a friendly between the two squads in October of 1990.

There were scheduled North Korean home matches against South Korea for the 2010 South Africa World Cup qualifiers, but they were eventually played on a neutral pitch in Shanghai due to inter-Korean tensions at the time.

This year, expectations are high that the away match will be played in North Korea.