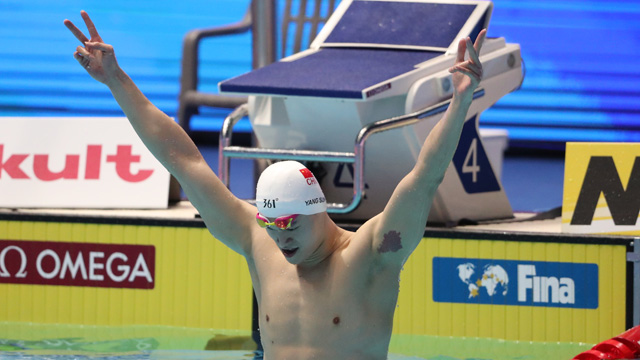 Anchor: Two leading swimmers have been censured for "inadequate behavior" by the world swimming body following a podium row at the ongoing FINA World Championships in Gwangju. The incident, involving Sun Yang of China and Duncan Scott of Britain, has brought renewed focus on doping allegations surrounding the Chinese Olympian.
Park Jong-hong has this report.

Report: Two of the world’s best swimmers have been publicly reprimanded for their conduct at a medal awards ceremony at the World Championships in Gwangju, some 330 kilometers south of Seoul.

FINA, the world swimming body, issued a statement Wednesday reprimanding Sun Yang of China and Duncan Scott of the U.K. for “inadequate behavior” during a medal ceremony the previous day for the men’s 200-meter freestyle event, at which Sun won gold.

Scott, a co-bronze medalist, refused to shake Sun’s hand or pose for photographs after the awards were handed out. The rebuke triggered Sun to react by pointing at Scott’s chest as they left the pool area, goading him and appearing to say “you loser, I’m winning, yes!”

Another swimmer, Olympic gold medalist Mack Horton from Australia, had refused on Sunday to join Sun on the podium after coming in second to the Chinese swimmer in the 400-meter freestyle.

The protests are connected to widespread suspicions that Sun’s swimming accomplishments over the past several years have been aided by illegal performance enhancing substances.

In 2014, the six-time Olympic medalist served a three-month suspension after testing positive for the stimulant trimetazidine, and last September destroyed a vile of his blood to prevent antidoping test collectors from analyzing it.

Sun, who seven years ago became the first man from China to win an Olympic swimming title, denied all the doping allegations and was ultimately cleared by an independent investigation panel.

Though he is allowed to compete at the world championships this year, he may still face punishment for the sample destruction incident. The Court of Arbitration for Sport is expected to rule on that case in September.
Park Jong-hong, KBS World Radio News.