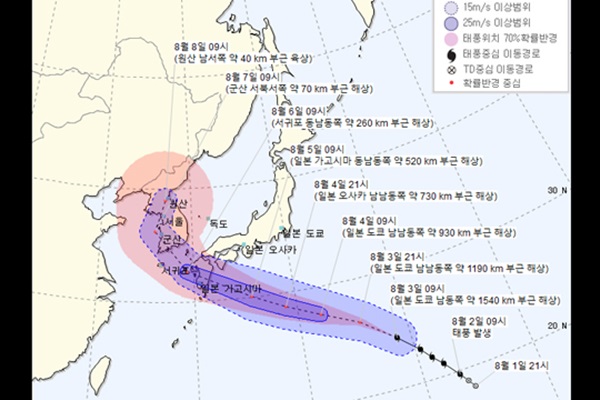 Typhoon Francisco is forecast to make landfall on the Korean Peninsula Tuesday night, bringing heavy rains and strong winds to much of the country.

The Korea Meteorological Administration said on Monday that the season's eighth typhoon is expected to enter from Korea's southern coastal waters after traversing Japan's Kyushu Island.

It is projected to move inland before veering northeast and out to sea Wednesday night.

Southern regions are expected to feel the effects of Typhoon Francisco by the daytime on Tuesday and the entire nation will likely be affected by Wednesday.

Southern areas as well as the provinces of North Chungcheong and Gangwon are forecast to receive 50 to 150 millimeters of rain through Wednesday, with over 200 millimeters in some coastal areas.

The Seoul metropolitan region, South Chungcheong and Jeolla provinces are likely to see ten to 60 millimeters of precipitation.

Francisco is currently classified as "small" with a central pressure of 985 hectopascals, but it is steadily gaining force as it moves north from the West Pacific.