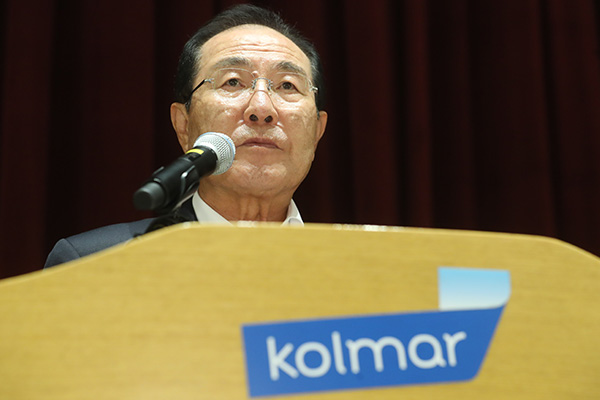 The head of a major cosmetics developer in South Korea stepped down on Sunday after sharing an inappropriate YouTube video with employees and making derogatory comments.

Korea Kolmar Chairman Yoon Dong-han issued a formal apology during a news conference in Seoul, saying that he feels deep regret and bears all responsibility.

Announcing his resignation, Yoon apologized to partner companies that are damaged by his wrongdoing, offering an apology to consumers, women as well as his employees.

Korea Kolmar, a major developer of cosmetics products, came under fire last week when Chairman Yoon played a short YouTube clip with far-right and controversial content at a monthly meeting attended by about 700 employees.

The video reportedly praised Japanese Prime Minister Shinzo Abe for not punching South Korean President Moon Jae-in in the face, amid a deepening trade row between the two nations.

The incident prompted public uproar and a boycott of the company's products.

Korea Kolmar offered a public apology Friday, saying that Yoon shared the video clip with employees to help them better understand current negative external conditions so they could better cope with the situation. The firm added that the video was aimed at calling for calm, instead of an emotional reaction against Japan’s economic retaliations to the South Korean Supreme Court’s rulings in favor of compensating victims of forced labor.