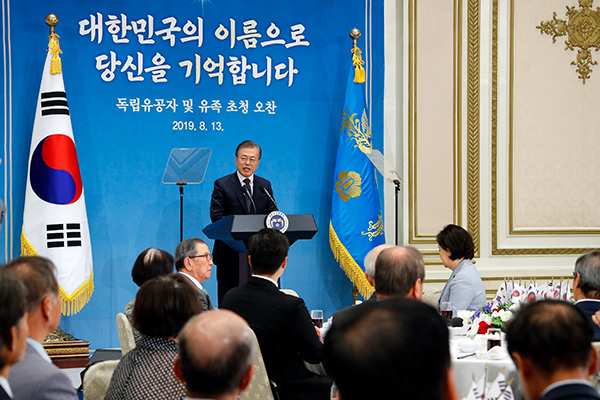 [Sound bite: President Moon Jae-in (Korean)]
"Japan has recently made a decision to exclude our country from its trade whitelist following its export control measures. It is indeed disappointing and unfortunate, given the two countries' joint friendly, cooperative efforts. The government will prepare ways to minimize the impact against our corporations and people while continuing to pursue a diplomatic resolution of the matter. "

Moon on Tuesday delivered this message during a luncheon with independence activists and their descendants, two days ahead of the 74th Liberation Day.

While expressing his appreciation for the independence movement against Japan's 35-year long occupation, Moon insinuated that the island neighbor is again failing to fulfill its responsibilities in Asia.

The government believes the series of trade sanctions Japan has implemented are in retaliation to last year's South Korean Supreme Court ruling that ordered Japanese companies to compensate elderly Korean victims for their forced labor during World War II.

Moon expressed confidence that South Korea will be able to overcome any difficulty and advance forward without external interference so long as the South Korean people have the power to reflect on its history.

Earlier on Tuesday, the president held a Cabinet meeting and instructed his ministers to calmly and effectively cope with the economic uncertainties caused by the diplomatic row with Japan.