Tensions Mount Ahead of Confirmation Hearings for Moon's Cabinet Nominees 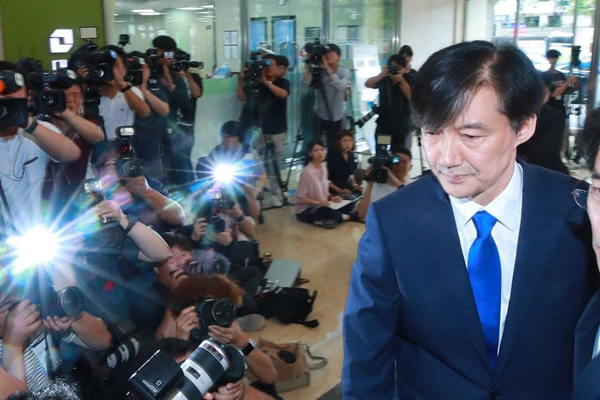 Anchor: Tensions between South Korea's political parties are mounting ahead of parliamentary confirmation hearings for President Moon Jae-in's Cabinet nominees, especially his justice minister nominee Cho Kuk. The opposition bloc is calling for Cho to be withdrawn from consideration in a move that's being criticized by the ruling party as political bias.
Choi You Sun reports.

On a visit to Gangwon Province to check up on regions affected by a massive wildfire earlier this year, Hwang said a justice minister should act in accordance with the Constitution and the legal system.

The LKP chief, who served as justice minister during the Park Geun-hye administration, attempted to cast a shadow on Cho by pointing out his past prison sentence for violating the country's disputed National Security Law. Hwang also criticized President Moon for choosing someone who was involved in what he claimed were activities aimed at overthrowing the government.

The LKP is also preparing a political offensive against Cho's failed duties as Moon's senior secretary for civil affairs and use of his social media to stir anti-Japanese sentiments during his upcoming confirmation hearing.

Some within the party are even calling for a boycott of the confirmation hearing in protest of Moon's nomination of Cho, despite objections from the opposition bloc.

The ruling Democratic Party(DP), in response, accused the LKP of engaging in outdated ideology-based politics, instead of focusing on verifying the nominee.

DP floor leader Lee In-young on Tuesday urged the opposition party not to force the National Assembly into paralysis again by pushing ahead with the boycott.

The minor Bareunmirae Party(BP), which has also been critical of Cho, expanded its criticism of Moon's recent Cabinet reshuffle.

BP floor leader Oh Shin-hwan questioned the political neutrality and qualifications of Han Sang-hyuk, the president's pick to head the Korea Communications Commission, referring to his recent comments on "fake news" and "freedom of expression."

Nominees for agriculture minister and the head of the Financial Services Commission are expected to face tough judgement over their possession of multiple homes, which goes against the Moon administration's real estate policies.
Choi You Sun, KBS World Radio News.