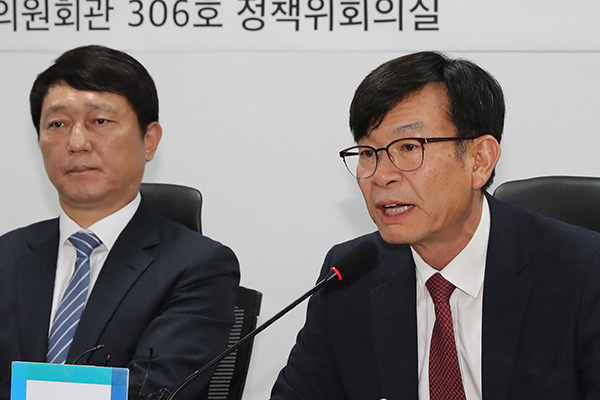 He made the remarks on Tuesday in an inaugural meeting of a task force committee on Japan's export restrictions involving the presidential office, government and the ruling Democratic Party(DP).

Kim said the top office, government and the DP have inspected conditions in the field and announced a set of measures to boost the competitiveness of the materials, parts and equipment industries and will continue to draft complementary policies.

The policy chief asked for the National Assembly's support when it deliberates on the budget bill so that the government's plans can be sufficiently reflected.

Regarding the trade dispute with Japan, Kim stressed a flexible attitude based on the other party's response and not adhering to one fixated strategy.

He said indirect damage on the domestic economy stemming from increased uncertainties can be more serious than a direct blow.

Kim noted that the government, top office and the ruling party were crafting countermeasures based on such assessments.

He also promised efforts toward overall economic stability such as  holding government-wide meetings that include the central bank chief to monitor market conditions.