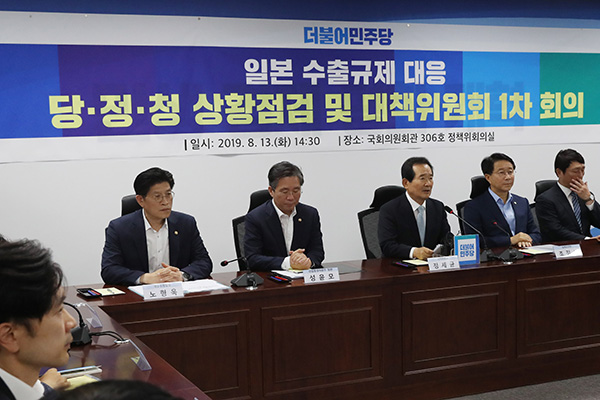 The South Korean government has decided to exempt over one trillion won's worth of national projects from preliminary feasibility studies to raise the country’s competitiveness in components and equipment.

The ruling Democratic Party, the government and the presidential office made the decision Tuesday during a joint meeting arranged to discuss countermeasures to Japan’s trade restrictions.

Projects worth a combined one-point-six-five-seven trillion won will be covered by the exemption from later this month to fast-track South Korea’s efforts to lower its dependence on Japan.

A preliminary feasibility study is mandatory for any project requiring over 30 billion won of the national budget. Cho Jeong-sik, the DP’s policy chief, said the governing bloc assessed that the exemptions are needed since the economic situation facing the country is so serious.

The ruling bloc also decided to launch a pan-governmental emergency monitoring system in early September to check on with related situations and deal with economic uncertainties. Bank of Korea Governor Lee Ju-yeol will also attend the meetings.