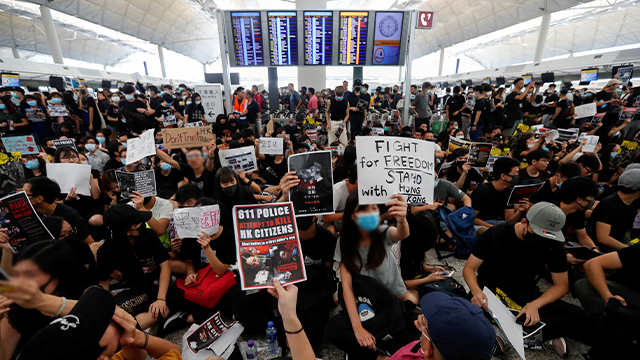 More than 300 flights were reportedly cancelled on Tuesday in Hong Kong as pro-democracy protesters occupied the international airport again.

According to the South China Morning Post, thousands of protesters jammed the terminal on Tuesday afternoon, preventing passengers from passing through security gates to check-in.

The Hong Kong airport authority then announced that all check-in operations would be suspended from 4:30 p.m., saying that terminal operations have been seriously disrupted as a result of the public assembly.

It added, however, that arriving flights will be allowed.

Thousands of people have occupied the airport's departures and arrivals halls for the past five consecutive days, protesting the Chinese government and Hong Kong police's handling of the city's recent rallies.