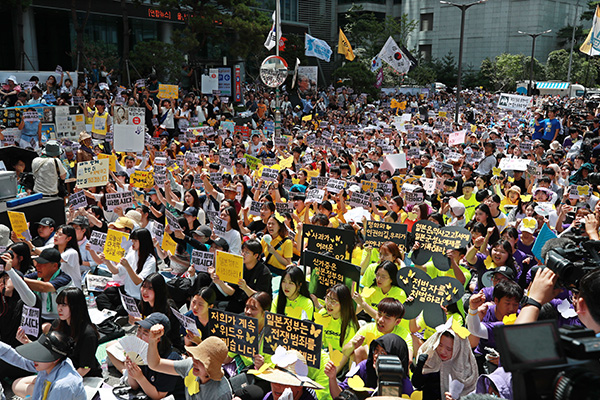 Anchor: A weekly demonstration in downtown Seoul, calling on Japan to give a formal apology over its wartime sexual enslavement of women, marked its one-thousand-400th gathering on Wednesday, coinciding with the government-designated memorial day for sexual slavery victims. The rally is garnering more attention amid escalating diplomatic and trade tensions between South Korea and Japan.
Choi You Sun has the details.

Report: Hundreds of South Koreans, including children and teenagers, gathered in front of the former compound of the Japanese embassy in downtown Seoul for a weekly rally to protest Japan's wartime sexual slavery.

Wednesday's rally holds greater significance as it marks the one-thousand-400th time it has been held since the inaugural gathering in January 1992, when South Korean victims and activists demanded Tokyo offer a formal apology to the victims, euphemistically referred to as comfort women.

It also comes on the International Memorial Day for Comfort Women, which Seoul designated last year, and a day ahead of the 74th anniversary of Korea's liberation from Japan's colonial rule.

Japan's sexual enslavement of up to 200-thousand women in the Asia-Pacific during World War Two, most of them Korean, came to light in 1991, when the late former sex slave Kim Hak-sun publicly testified about her experience.

The victims' testimonies, however, have continuously been denied by Tokyo. A controversial agreement between Seoul and Tokyo under the previous Park Geun-hye administration in 2015 to "finally and irreversibly" resolve the issue further reduced chances for the victims to get a proper apology.

The two countries are facing their worst crisis since a 1965 treaty normalized diplomatic ties amid a trade row triggered by Japan's export curbs against South Korea in an apparent retaliation against South Korean top court rulings on Japan's wartime forced labor compensation.

Time is quickly running out for the elderly victims. Only 20 registered with the government are still alive.

The weekly demonstrations urging Japan to apologize for its wartime atrocities against women and take legal responsibility and compensate the victims have become world-renowned for their longevity and message on the global issue of human rights.

The messages targeting Tokyo are expected to be echoed in nine other countries, including Australia and New Zealand this week.

On Namsan in the heart of Seoul, a new statue of three girls, each representing Korea, China and the Philippines, with former sex slave Kim Hak-sun looking on, was erected on Wednesday.

The statue was donated to the city by a nonprofit group of Koreans residing in San Francisco in memory of the victims.
Choi You Sun, KBS World Radio News.