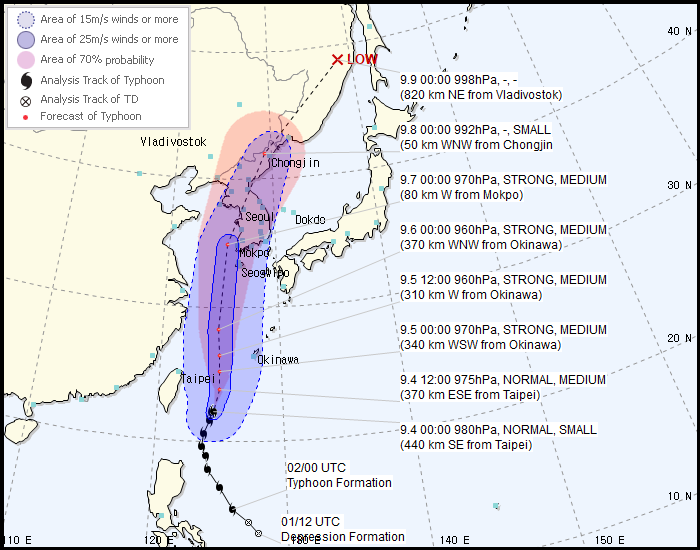 Anchor: Typhoon Lingling is approaching the Korean Peninsula, sparking concern over potential casualties and damage. The 13th storm of the season is expected to make a direct hit on the central regions of South Korea this weekend, keeping many on high alert.
Moon Gwang-lip has more.

Report: Since being upgraded from a tropical storm on Monday, Typhoon Lingling has continuously gained strength on the back of warm tropical weather conditions.

According to the Korea Meteorological Administration(KMA), the typhoon is expected some 300km west of Okinawa on Thursday afternoon, and will hit waters west of Jeju Island early Saturday morning.

Lingling is currently projected to then move north, sweeping along China’s coast and toward the west coast of the Korean Peninsula. It is likely to make landfall in either North Korea’s Hwanghae Province or South Korea’s Gyeonggi Province on Saturday night.

The season’s 13th storm is expected to maintain strength as it makes landfall, and most of South Korea is expected to be impacted by heavy winds and rain.

The precipitation will come in addition to the so-called autumn monsoon, which will likely bring up to 200 millimeters of rain to many parts of the country between Wednesday and Thursday.

In 2010, Typhoon Gonpas followed a similar route as Lingling at a similar time of the year, killing six people after hitting the Korean Peninsula and causing over 160 billion won in damages.