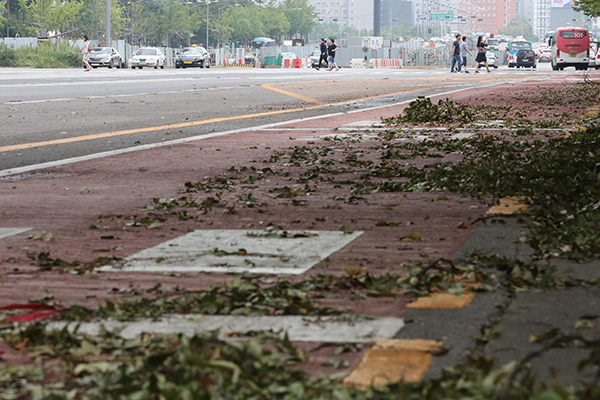 The government estimated that Typhoon Lingling killed three people and damaged about 94-hundred facilities with heavy rains and strong winds.

The Central Disaster and Safety Countermeasures Headquarters said on Monday that three people died and 24 were injured due to the typhoon, including eleven firefighters and police officers.

A woman in her 70s died in Boryeong, South Chungcheong Province on Saturday after she was knocked over by strong winds, and a bus driver in his late 30s died at a parking lot in Incheon after walls collapsed on him due to the heavy winds.

Later in the day, a 61-year-old man was killed after being struck in the head by a roof panel at a golf driving range in Paju, northwest of Seoul.

About 15-hundred reports were filed with authorities on damages to private property, including residences, factories and commercial buildings. Some 15-thousand hectares of farmland were affected by Lingling as well.

While more than 161-thousand households across the country experienced power outages due to the typhoon, the state-run Korea Electric Power Corporation said on Sunday that it has restored power to most of those affected.

As of Sunday, 232 flights were cancelled at 13 airports across the nation, including Incheon, Gimpo and Jeju airports.

After passing through North Korea on Saturday evening, the typhoon dissipated near the Russian city of Vladivostok on Sunday morning.