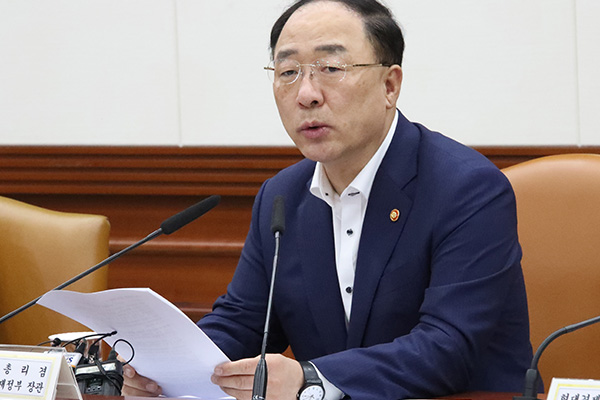 The finance chief visited a market in Gongju, South Chungcheong Province on Monday and pledged to deliver rapid aid in the areas of disaster insurance, restoration costs and personnel support for damages inflicted by the typhoon.

He also promised tax breaks in various forms for citizens in affected areas.

Speaking to reporters regarding the economy, the minister said it will be difficult to achieve the two-point-four percent growth target this year but that the government will do its best to achieve the highest growth possible by employing all available policy tools.

But Hong denied plans of lowering the growth target saying the government will focus on attaining the goal.

Regarding the falling growth potential, he promised efforts to increase labor and capital input through measures to facilitate investment and combat the low birthrate.

The minister also vowed to vigilantly monitor external factors such as the Brexit situation, the U.S.-China trade war and Korea's trade tensions with Japan to prepare against unpredictable market volatility.