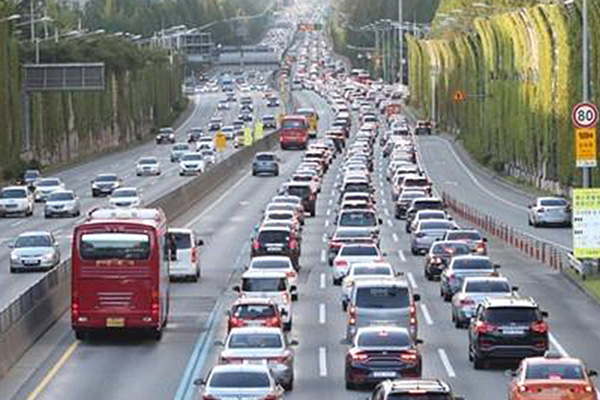 South Korea's traditional autumn holiday, Chuseok, is expected to cause the heaviest traffic Thursday morning and Friday afternoon, the first and second days of the four-day holiday.

According to a survey by the Ministry of Land, Infrastructure and Transport, about 30 percent of respondents said they were planning to depart for their hometowns Thursday before noon.

The ministry said on Tuesday that slightly more than 25 percent said they were planning to return to their residences on Saturday, while 23-point-six percent of respondents said they would likely do so Friday afternoon.

Roads are expected to be busiest on Friday with the number of people heading to or returning from visiting family likely the most concentrated on that day.

The ministry expects it will take an average of eight hours and 30 minutes to drive from Seoul to Busan, about two hours longer than previous years.

Busan to Seoul will take a similar amount of time, while traveling from Mokpo, South Jeolla Province to western areas of Seoul will take some seven hours and 30 minutes.