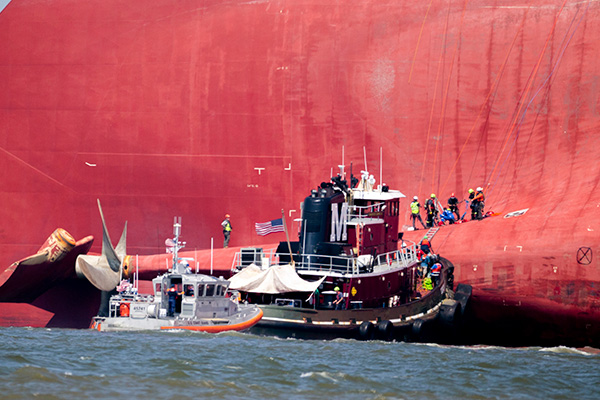 Anchor: All four Korean crew members trapped in the engineering compartment of a 71-thousand-ton vessel that capsized off the east coast of the U.S. have been rescued. They are reportedly in good health, despite having been trapped in the ship for over 40 hours.
Celina Yoon has more.

The U.S. Coast Guard said on Monday that all four South Korean crew members trapped in the cargo ship Golden Ray were rescued.

[Sound bite: Capt. John Reed - Commander, Coast Guard Sector Charleston]
"Their condition is relatively good for having spent close to 30, 34 or 35 hours in the conditions they are in, and they are being treated by emergency medical services in Glynn county."

All 24 members of the international crew are now safe, including the 20 who were previously evacuated within ten hours of the initial accident. Despite halting search operations due to smoke and flames on board the ship, rescue personnel were in high spirits as they began the final rescue.

[Sound bite: Capt. John Reed - Commander, Coast Guard Sector Charleston]
"Those guys were motivated this morning, and the team from that delivered them on board - I think you most you saw that as the air station delivered those guys out there. They were charged up and knowing the people were alive made all the difference. And knowing where to go on a ship that's 600 plus feet big, where to go was was an outstanding job by the engineers last night, and the salvage team putting that plan together."

After completing a safety inspection, the U.S. Coast Guard cut a hole in the hull to extract the trapped crew members, which took nine hours to complete.

The Coast Guard is now mulling over how to tow the capsized vessel while preventing environmental contamination.

Determining the cause of the accident is expected to take a while.

The 71-thousand-ton vessel belonging to Hyundai Glovis, the logistics unit of South Korea's Hyundai Motor Group, was carrying around four-thousand cars when it capsized shortly after leaving the Port of Brunswick, Georgia, on Sunday.