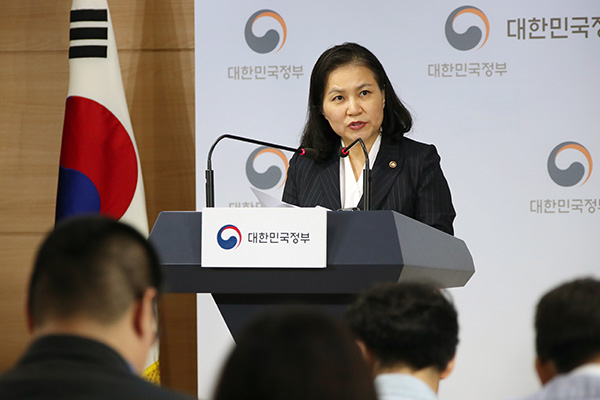 Anchor: South Korea has filed a complaint with the World Trade Organization against Japan's trade curbs, which restrict exports of key high-tech items to South Korean chipmakers and other electronics manufacturers. Announcing the decision, Seoul said that Japan's initial trade sanctions are politically motivated.
Park Jong-hong has the details.

While announcing South Korea is filing a complaint with the World Trade Organization(WTO) against Japan's trade curbs, she said the measure is to prevent a repeat of politically-driven trade abuses.

[Sound bite: S. Korean Trade Minister Yoo Myung-hee (Korean)]
"Considering the fact that South Korea is a key supplying nation of semiconductors and displays, Japan's export curbs pose great uncertainties and anxiety to the global economy. Moreover, Tokyo implemented the measures just three days after announcing them without informing Seoul in advance, showing no regard for a neighboring nation and ignoring procedures."

The appeal to the global trade watchdog comes 69 days after Japan implemented tougher restrictions on South Korea-bound shipments of three key materials that are critical to the production of semiconductors and display panels.

Under the export curbs, shipments to Korea have to go through separate authorization procedures that can take up to 90 days with no guarantees for approval. It had previously taken only up to 2 weeks following the placement of orders.

[Sound bite: S. Korean Trade Minister Yoo Myung-hee (Korean)]
"The export curbs were implemented in early July and the effects from the curbs are already continuously occurring. After completing a detailed analysis, we have launched the process of filing a complaint with the World Trade Organization. While Japan's elimination of South Korea from its shortlist of nations given export clearance took effect on August 28, we have opened up to all possibilities regarding our response measures and are currently reviewing them."

The Ministry of Trade, Industry and Energy says with the WTO complaint, South Korea and Japan are required to hold bilateral talks to resolve the issue over the next two months.

Should the two fail to narrow their differences, the WTO Dispute Settlement Body will establish a panel to look deeper into the case.