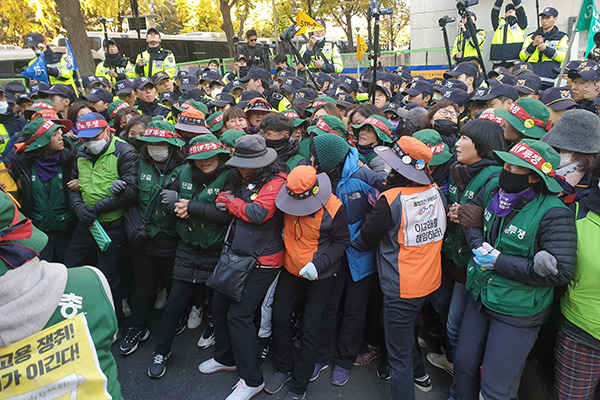 Highway toll booth workers clashed with police during a protest march towards the presidential office on Friday, leading to a dozen arrests.

The workers demanded that all of their 15-hundred coworkers, who were laid off, be directly hired by the Korea Expressway Corporation.

Some 100 protesters, who are members of the Korean Confederation of Trade Unions, continued their second day of protests near the top office and demanded talks with presidential officials to discuss their requests.

Clashes ensued when police blocked their procession and thirteen individuals were taken into custody on charges of violating the Assembly and Demonstration Act.

The toll collectors have been protesting over the past two months at the headquarters of the Korea Expressway Corporation in Gimcheon, North Gyeongsang Province.

Some of them traveled to Seoul and have been staging a rally in downtown Gwanghwamun since Thursday.