Kang Departs for San Francisco for Talks with Pompeo 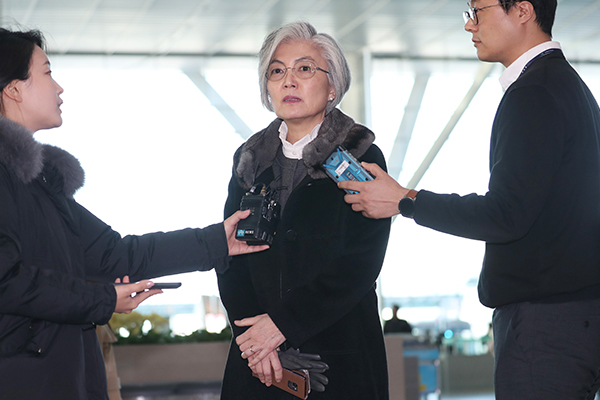 Foreign Minister Kang Kyung-wha says she will listen to what the U.S. has to say regarding South Korea's possible dispatch of troops to the Strait of Hormuz for joint defense efforts in the region.

Speaking to reporters at Incheon International Airport on Monday before leaving for San Francisco, Kang said the Seoul government continues to review the issue.

She said her talks with U.S. Secretary of State Mike Pompeo on Tuesday will be considered in the government's decision.

Washington has asked its allies, including Seoul, to take part in a U.S.-led maritime security campaign to protect commercial and civilian vessels in the Strait of Hormuz, following attacks on oil tankers since June.

Up until last year, Seoul had positively viewed the idea of a troop dispatch, but with tensions escalating between Washington and Tehran, it has taken a more cautious position in recent days.

When asked what will be discussed with Pompeo in regards to North Korea, Kang said it is important that Pyongyang refrains from additional provocations and that related discussions are continuing between the two sides.