Hot Issues of the Week 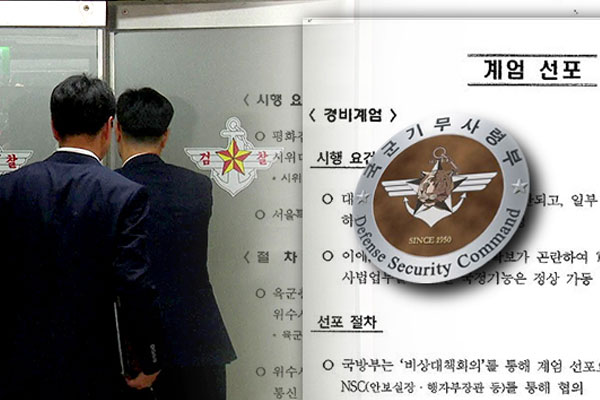 The Defense Security Command(DSC) is accused of preparing for a possible declaration of martial law during last year's anti-government candlelight protests.
According to a military document Rep. Rhee Cheol-hee revealed last week, the Army's counterintelligence investigative authority drafted the plan in case the protests against then-President Park Geun-hye escalated.
President Moon Jae-in issued a special order Tuesday to form an investigation team to probe the controversial military unit. He also instructed the defense minister to ensure the independence of the probe by setting up a team outside of the defense chief's chain of command.
The team will be composed of military prosecutors from branches other than the Army, and without career experience at the DSC.
Presidential Spokesman Kim Eui-kyeom said that many former and incumbent defense officials could be implicated in the allegations.
The controversial martial law plan was allegedly drawn up to deal with the fallout of then-President Park’s parliamentary impeachment being overturned, should the Constitutional Court have made that ruling.
The military had predicted that the protests would have intensified if Park regained power.
The DSC document also discussed the mobilization of nearly five-thousand armed soldiers, 14-hundred commandos and some 200 tanks against the candlelight protesters in the event of a martial law.
President Moon also tasked the special investigation team with probing allegations that the Army counterintelligence command were mobilized for the surveillance of the bereaved families of victims of the Sewol ferry tragedy.