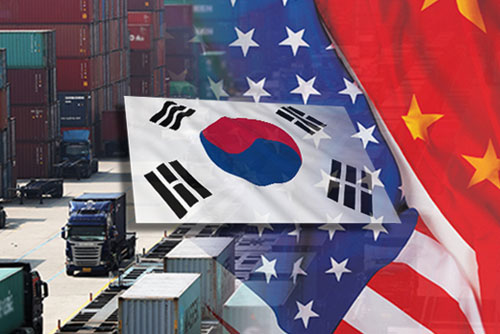 The Bank of Korea(BOK) has downgraded its growth forecast for this year from three percent to two-point-nine percent.
BOK Governor Lee Ju-yeol made the announcement in a news briefing Thursday after the bank's monetary policy board voted to freeze the benchmark interest rate at one-point-five percent for July.
Citing dismal job figures, the central bank also slashed its growth outlook for next year by a tenth of a percentage point to two-point-eight percent.

Chairing an economy-related ministers' meeting on Thursday, Finance Minister Kim Dong-yeon likewise said employment conditions are in their most serious state since the 2008 global financial crisis, adding that related indices are unlikely to improve in the near future.
South Korea's monthly job growth marked 106-thousand in June, staying below 200-thousand for the fifth straight month. In the first half of the year, the number of the employed grew by roughly 142-thousand a month on average. That's less than half of the average monthly growth posted last year.
Kim, who doubles as the deputy prime minister, also expressed concerns over the U.S.-China trade war which is rattling the world economy.
He said that the trade conflict between the two economic powers will likely pose serious risks to the export-driven South Korean economy, as it is heavily dependent on external factors and the U.S. and China are its major export markets.
While projecting that inflationary pressure is not expected to be significant, the central bank said it would carefully consider whether or not to adjust the level of monetary easing.
Still, expectations are growing that the BOK will raise the key interest rate before the year’s end to try and keep pace with the U.S., as the Federal Reserve is likely to push up interest rates again in the second half of the year.